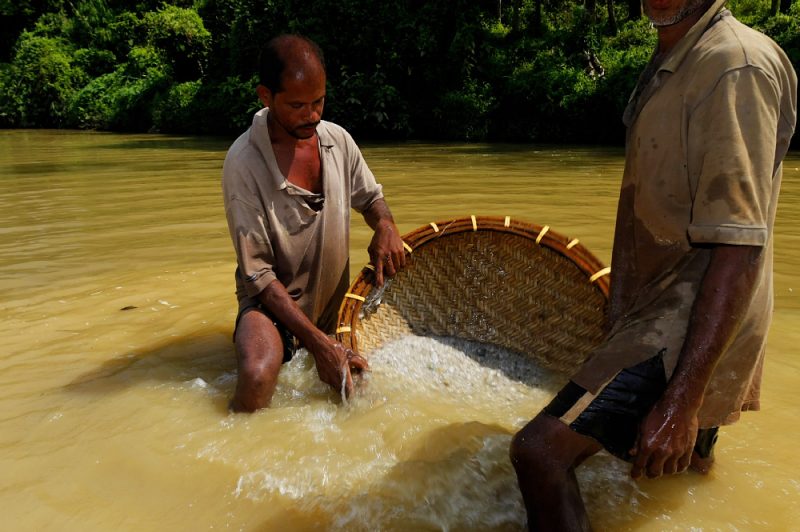 Gem mining in Sri Lanka, and in alluvial plains in general is large business.  During my research trip to Sri Lanka, I was lucky to visit one such mine.

During our Sri Lanka expedition, we took part as a biologist in a private revitalization project in Ratnapura province. A rubber tree plantation was gradually revitalized back to the rainforest, an initiative from a Nalini Elawalla, from the rich family in the Sri Lankan countryside. In will write more about this later.

Nalini, out hostess, brought us one day on a trip to show her business – jewelry and gem industry among others. So we came to her property. Several people greeted us in front of the house, probably local managers. It was clearly a good business, as the property looked clean and nice, with fruit trees and gardens. But Nalini was such a good manager and our lodge in the restoration site is a great example. Needless to say, this business is lucrative and easy to finance such property.

Sri Lanka is an old piece of the Earth, with the variety of minerals, gems among them. The geological forces, chemistry, heat, and pressure had enough time for gem crystals to grow. Subsequent weathering the rocks through the water and other elements wrestled them from the bedrock. Sri Lanka’s gems are largely found in alluvial deposits in the Highland belt, made up of gravels that have washed down from the mountains and been deposited in the floodplains of rivers and lakes.

Nearly all the gem formations in Sri Lanka are located in the central high-grade metamorphic terrain of the Highland Complex. They were discovered a long time ago. Sri Lanka was affectionately known as Ratna-Dweepa which means Gem Island. The name is a reflection of its natural wealth. Even Marco Polo wrote that the island had the best sapphires, topazes, amethysts, and other gems in the world. Today, Sri Lanka has a rich tradition and remains vitally important to the modern gemstone market. Sri Lanka has a true mine-to-market industry, both domestically and for export.

After some refreshing drinks, we headed toward the river. The scene as not so tidy now, but I guess, when you work in a mine, you can stay clean and tidy. The mud was a dominant element here. We were standing on a river bank, watching the workers. Some of them were in the shallow, very muddy pits.

In the first, stage, the miners in the pit remove the non-gem bearing material, often soil, sand and gravel chop out the wet clay and illama with a mattock, pile it in small wicker baskets, and toss them up in relays to the surface. This material is taken out of the pit and sorted and stored to be used later to fill in the hole. The process of removing and collecting the soil, sand, and gravel is done in two ways. If the pit is shallow, the miners stand at different heights in the pit. The men above empty the baskets and drop them back in one motion, with the practiced rhythm and jugglers. The soil and other materials are passed from hand to hand and are deposited beside the pit. 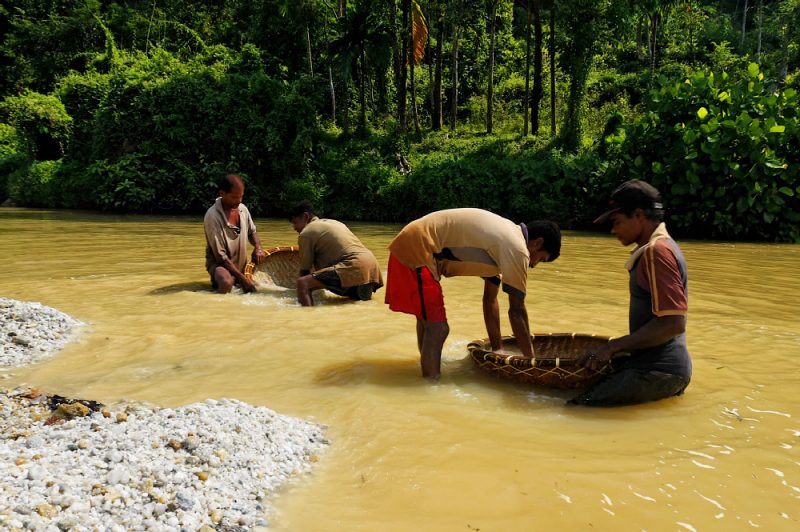 Illama now needs to be washed, and here, the process ends in the river. We waded through the creamy colored river, to workers panning and sifting the gravel, looking for the precious stones.

Miner put a few handfuls of illama in a shallow circular wicker basket. This is then immersed in water and turned a number of times to remove any mud, gravel and sand this enables the light, ordinary pebbles and sediment to escape, leaving the heavier pebbles behind.

Finally, when a basket of illama has been thoroughly washed, the contents, called nambuva, are examined for gem minerals. The basket is tilted at an angle allowing the sunlight to fall on the contents.

The heat was too much for us in less than a half an hour; yet, those workers bare skin must are baked. But, they have a dark tan and are used to the scorching sun. Most of them have wide, straw hats and are after all in the water. I hope, they have a good wage.

During our short stay, we haven’t seen any gem. I can’t tell what is the effect of the mining on rivers in Sri Lanka. What I saw here, it should be a local disturbance.

This is the end of our small trip.