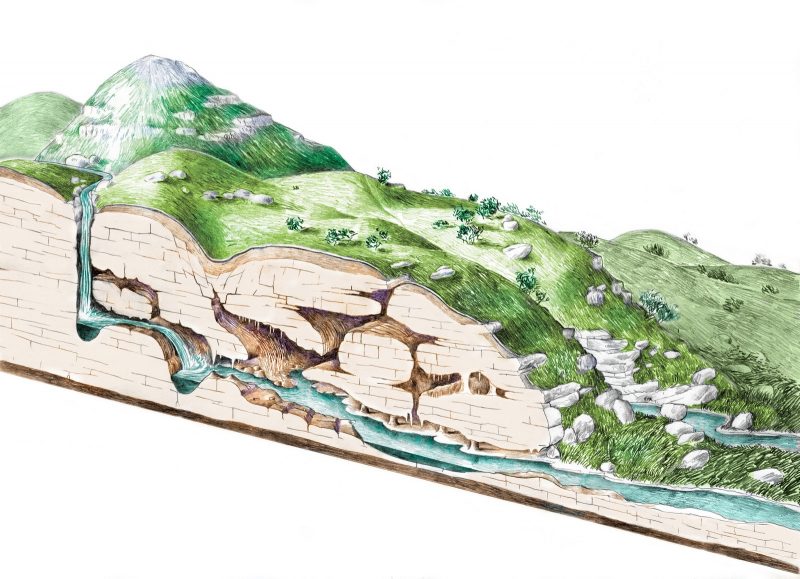 Lost rivers are Dinaric streams in karst, limestone landscape that disappear in the underground. They often flow in karst plains.

Not all rivers reach another river, sea or lake. They literally disappear from the surface. They are usually karstic lost rivers, or just dry up on the surface, either as an alluvial fan or inland delta.

Limestone makes up much of Dinarid mountains. It is a harsh, rocky environment, sculpted by eons of weathering and dissolving by water. Such porous bedrock is called karst.

Karst is with extensive underground water circulation. Unlike alluvial plains with gravel and sand, there are actually underground flows with “underground rivers”, “lakes,” etc. Water at the surface is the mere surface manifestation of these waters. In the dry season, water is scarce and recedes to the underground.

Coupled with this phenomena is karst polje (limestone plains in highlands) that are seasonally flooded when water from the underground fills all spaces and the goes to the surface. Usually, there is a short river in the polje, with a source on one side and the disappear in the abyss on the other side. It is called the lost river, and there are many such floods in the Dinaric mountains of Croatia, Slovenia, Montenegro, etc. The water, however, keeps flowing in the underground. The water is not lost forever; it will redurface again as the river with a different name, or it will spring under the sea surface.

Also, some rivers run out of the water in the dry season due to the porous riverbed. This is the case even in the temperate regions.

What are the rivers?
Deltas – where river is pushing to the sea
Valleys