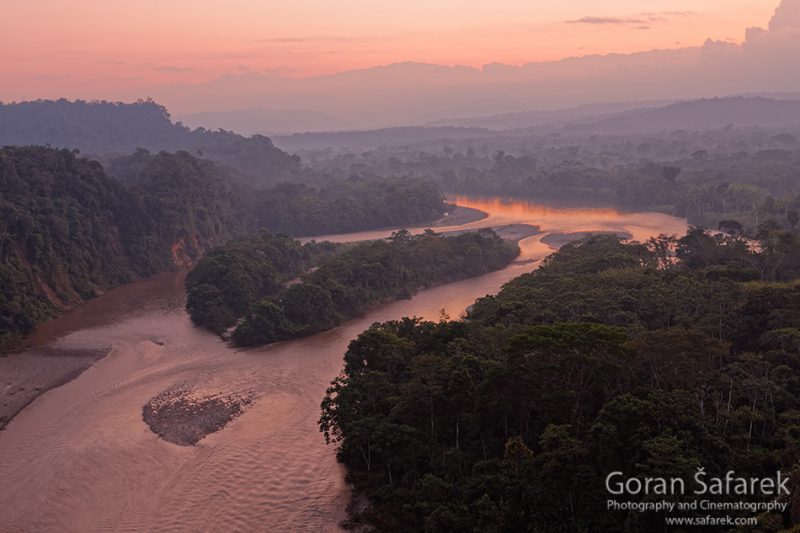 The Eastern Andes are extremely rich in water. Fed by extraordinary humidity, numerous rivers are born here and which flows towards the Amazon basin. One of them is Río Anzu in Ecuador, where I have spent several days.

During our expedition in Ecuador, after we finished our main scientific work at Yasuni National Park, and just before the visit to Macas region and Shuar Indians, Kruno and I have decided to travel on the eastern Andes and enjoy its lush rivers. We headed to Tena, the rafting and adventure hub of eastern Ecuador. To my resentment, we agreed to skip the rafting (Kruno is not a fan of adrenalin pumping activities), so we have chosen a more relaxed time in the lodge.

Nested on the cliffs above the river and the Amazon basin is a Shangrila lodge. It is an open wooden castle, overlooking the gorgeous views of the Ecuadorean jungle 100 meters below a cliff. With three full meals with wonderful local fruits, it offers a selection of tours/expeditions with a guide. 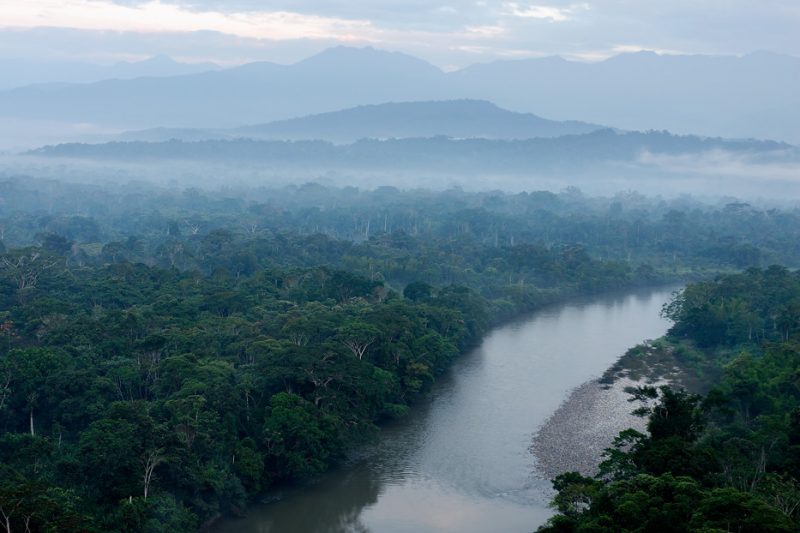 I remember with joy my first night. I slept in a wooden suite, simple but cozy, just a few steps away from the incredible view. The dawn that morning was exceptional. The river, all red from the fiery sky was bending a hundred meters below my feet, hitting the base of the hill and turning slightly. Low water level, the result of the dry season has revealed gravel and sandbars along the banks. The Amazon rainforest was still in the mist, but the nearest trees were visible, overhanging the river in a constant battle for the light and the soil. I know that there first trees, some growing on the barren gravel or sand are pioneer species, early colonizers that quickly attain the height, but are ultimately being overshadowed by later arrivals, but stronger competitors. Constant erosion and sediment deposition however always leaves the room for these pioneers. 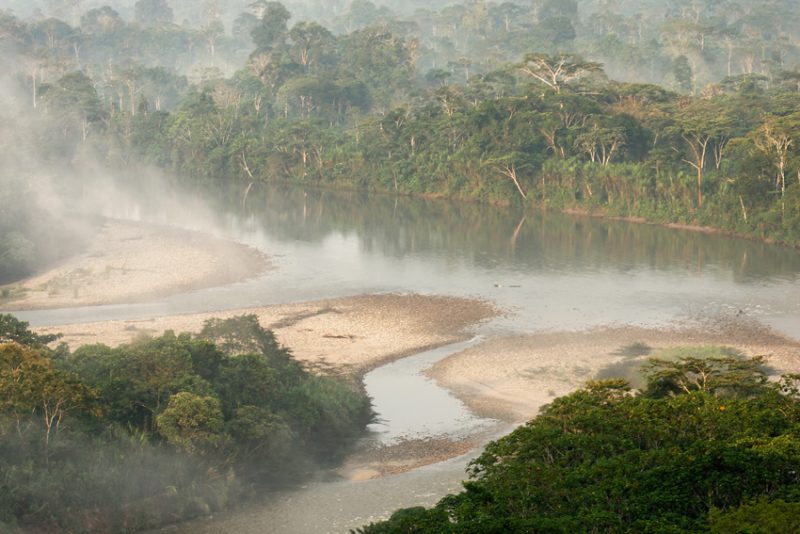 The layers of the forest, each more distant were losing the details and contrast, kilometers of the jungle. In one direction, this uniform lowland carpet abruptly rose the green hills, the foothills of the mighty Andes. I was there not even one month earlier (Red River story), with sweet memories of all this richness, small rivers with rapids entangled in the moss, lichen and other epiphytes. On the top, volcano peaks glistened, especially ice and snow caps. 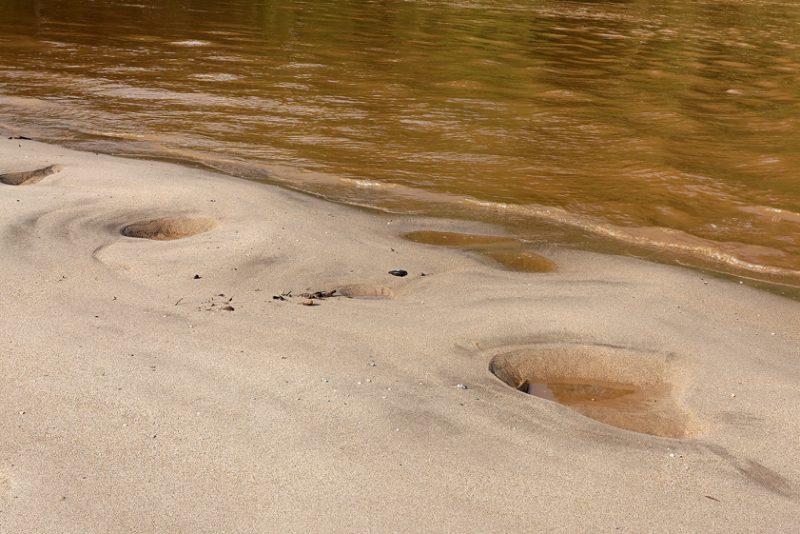 This lodge was the base for exploration of the river and the jungle. The river here is, judging from the sediment and morphology, still in its middle stretch. Large rocks, not even gravel still, were scattered around. Yet, just on the other corner lays sandy bars, perfect beaches, obviously where the river current was less strong. The river was milky brown, full of suspended sand and mud. I can just imagine how it must be in the rainy season when the torrent is in full throttle.

The decision was made even before – I will swim here. My tropical tan nicely matched the river color. I dipped my feet in the Anzu, and as I expected it wasn’t very cold, these are tropics after all. Soon, I was completely immersed in the river, like o driftwood. 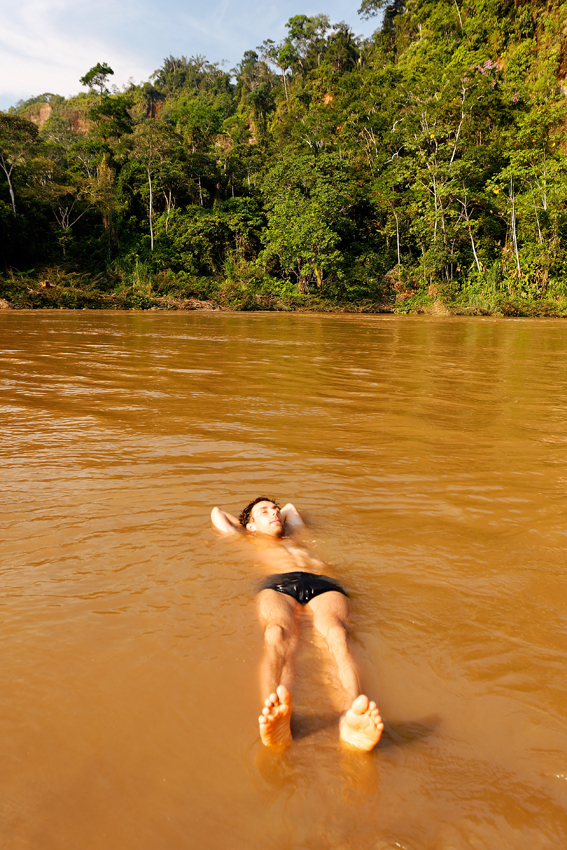 Later, we ventured in the jungle. It is true lowland tropical rainforest, with huge trees, buttressed by the giant side roots. The epiphytes layer is not as thick as in the Andean forest, but the trees are much bigger and taller. 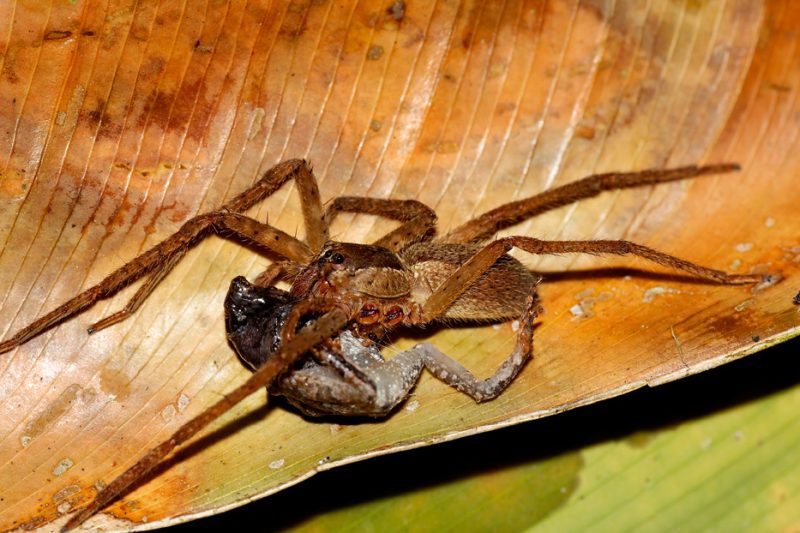 But, the forest is obviously not primary. Big stumps betray the presence of the people. We stumble upon one palm on the ground. “We cut it, but not for the wood” explains Alex, my guide, a local Indian from Quichua tribe. This palm has become a nursery for huge larvae. A species of beetle come here to lay the eggs. Young Quichua takes his knife and scrape some rotten wood and grabs a fatty larva, wriggling in his hands now. Like a finger, this pale yellow-white sac with the head and legs is an important source of the proteins and fats. 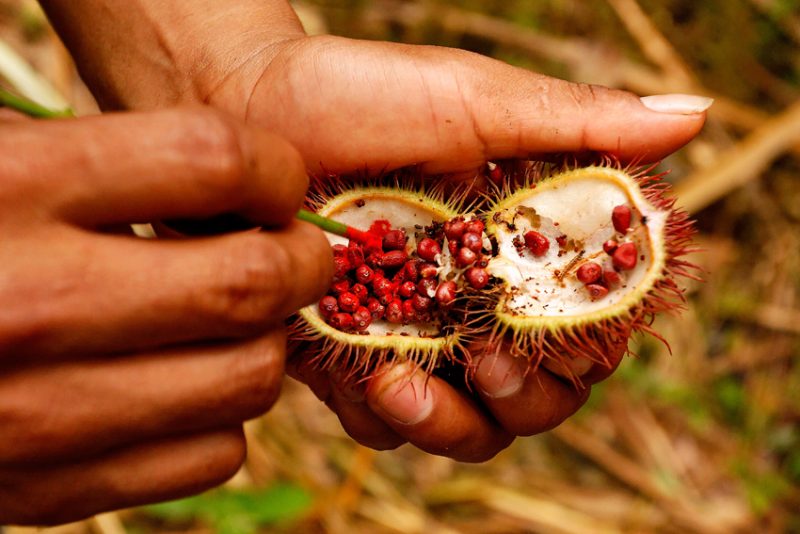 This same palm chonta is used for the construction, tools, and weapons. I still vividly recall two-meter long spear, from dark chonta palm, aimed at my face and poking our car’s tires in Yasuní National Park, just a few days ago (Read the story). Its wood is durable and iron hard. Many other plants are useful too. Large Heliconia leaves in seconds are promoted to a plate for the lunch; some seeds to a natural dye for a make-up. Probably the most useful are medicinal plants – for malaria, stomach problems, kidneys…”. The doctor is far away, and it is expensive too” says Alex. I know it is the truth, as western pharmaceutical companies are scouring Amazon in search for new drugs…and profits. 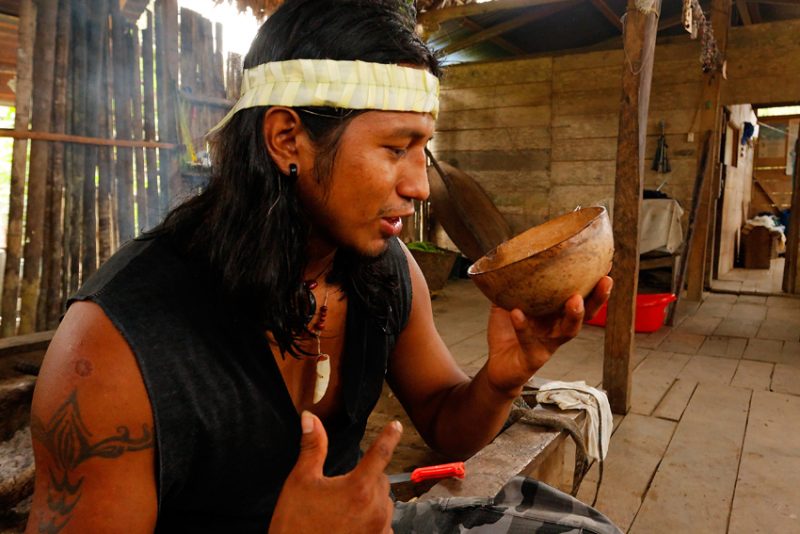 After some walking on a narrow forest path, small gardens of bananas, cocoa, yucca, and other plants replaced the forest. Soon we ended up in the small village, just a few wooden houses. Civilization swept into indigenous tribes several decades ago and brought metal, plastic, and glass, along with some bricks for the buildings, but Quichuas still make their livelihood in nature. I was invited into one of the houses and offered a tea. “This tea fills us with energy and we sip it all day long. Women get up early to make a fire and prepare it” explains Alex. I try it, a strong aroma of black tea fills my mouth. Now, it is time for a lunch: that larva from the palm, only fried, some fungi and plants. I take the larva, it has shrunken a bit, but still, it is big. I grab the head and bite the rest. It resembles the pork rind…hey, it’s great! 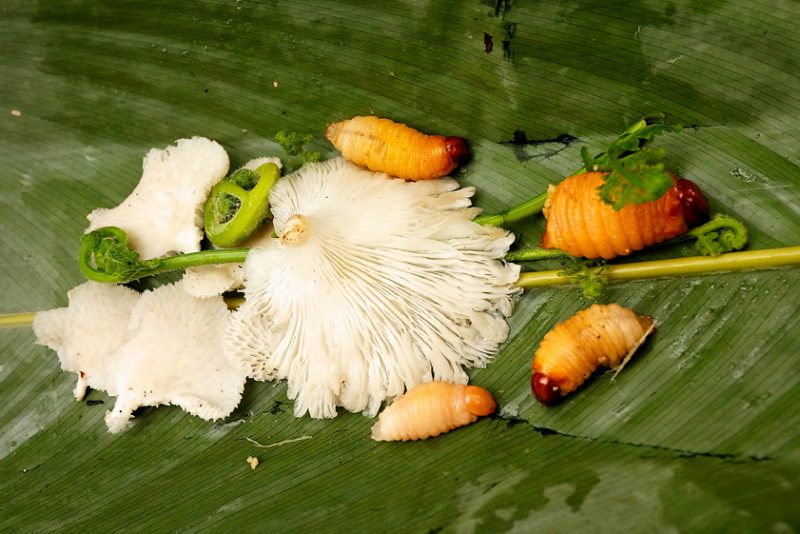 A small stream flows through the village. Slow and reddish, it must springs in the forest. It’s not the only one, dozens of them are snaking and hidden in the jungle. I followed one of them until the rocky cliff and started descending down the crevice, holding the branches for safety. Finally, a damp shade welcomed me on the bottom. The current must have carved this mini canyon, but now only a faint stream silently gurgles on the bottom. The splashing of my boots in the water echoed the walls that were becoming higher with every step. I had to be very careful on the slippery bottom from the film of algae, avoiding the fallen trees at the same time. The rocky walls become so high now, that only slivers of light penetrated the small canyon. At one point, few waken bats fluttered around my head and flew to a more tranquil place. 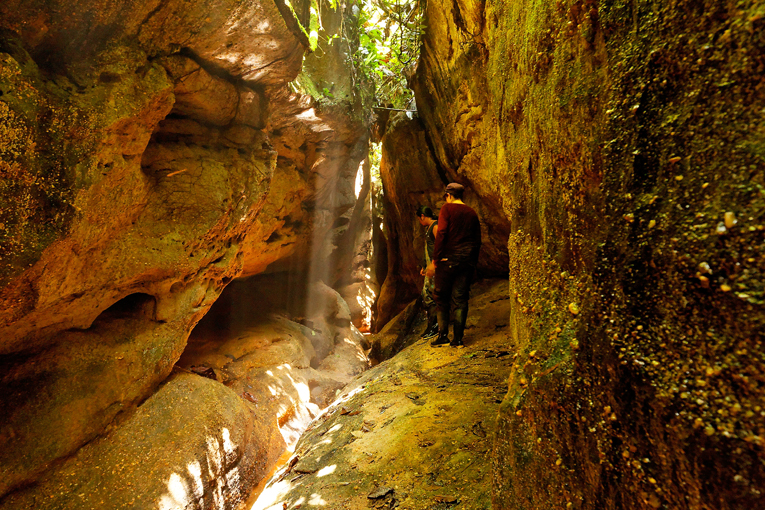 The walls have not only become taller but closer too. I have pulled my belly and started wriggling like a snake. That was just the beginning; my small exploring has become a canyoning suddenly. Not only the passage has become narrow, but my feet have also lost the ground. Like a spider, I was groping with all my limbs, trying not too fall. My clothes have become wet and dirty, but this was the least of my concern at the moment. 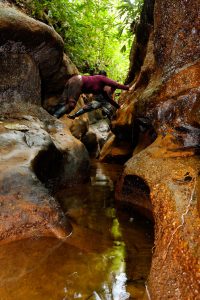 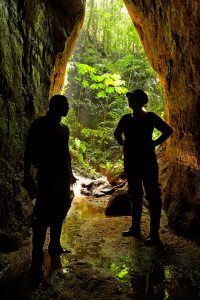 The darkness ensued in front of me and the way out was climbing up the slippery, wet rock. I pushed ones to a side of the wall with my back, the other with my feet and as caterpillar wriggled in this small tunnel. The water was trickling on my face, my hands trembled, but I have managed to climb upstairs. Five minutes again the same, but instead the few drops, there was a small waterfall was spraying me in the face. It took me half an hour before the canyon has finally widened and let me get out.

Just one drop of the river

The time has come to actually start navigating the river. But not with the paddle in my hand, more as a log floating on the surface. An old truck tire has been promoted to a boat only for me in next 30 km. The water is warm enough to spend in it next few hours and I was ready! Slowly, but inexorably my wooden castle on the top of the cliff was disappearing from the view as I floated downstream. 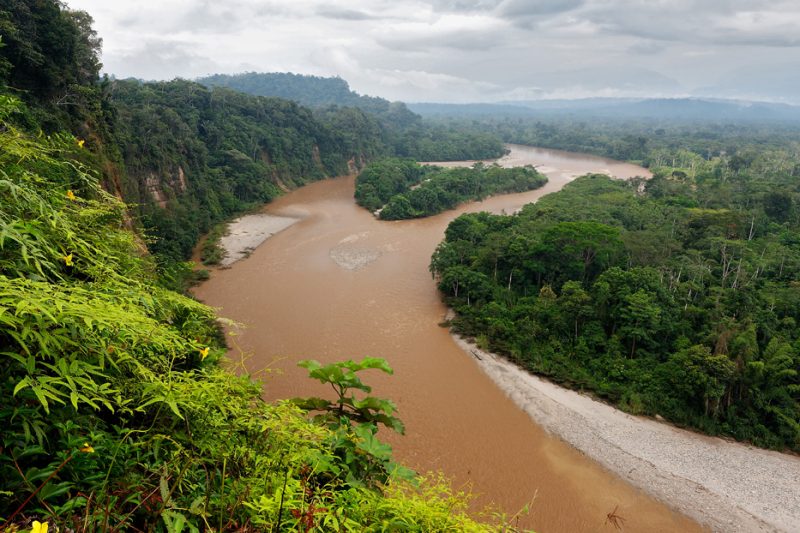 Riverine islands, steep banks, gravel, and sandbars were my constant companions, and sometimes tree branches from the banks tried to snatch me. Flocks of parrots and other birds would greet me, fluttering with the wings. Sometimes I would encounter naked kids enjoying the swim or adults fishing. The sound of the rushing water and rapids warned me enough to hold tightly the tire. I have been hardly noticing boulders, hidden on the rapid crests, jostling me like on rodeo. I was completely wet, sprinkled by the rapids, but everything turned well. An hour later, I lay immobile on my vessel, letting the river carry me wherever it wants. I felt a inner zen, becoming one drop of the river. 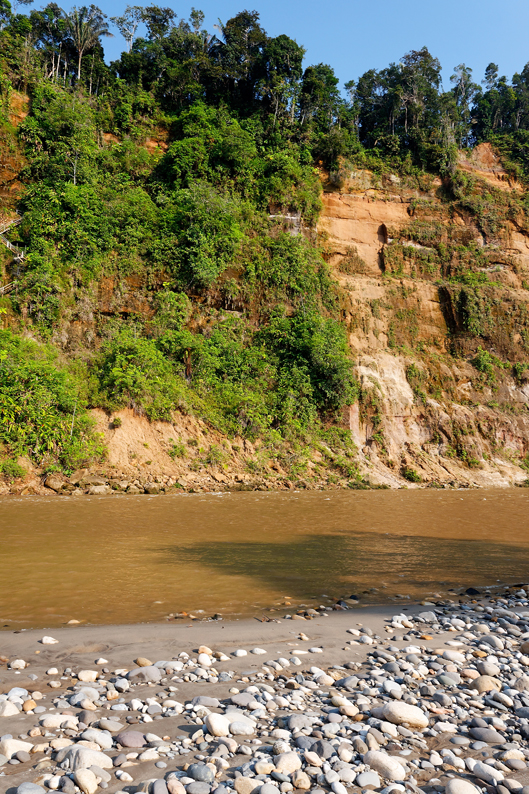 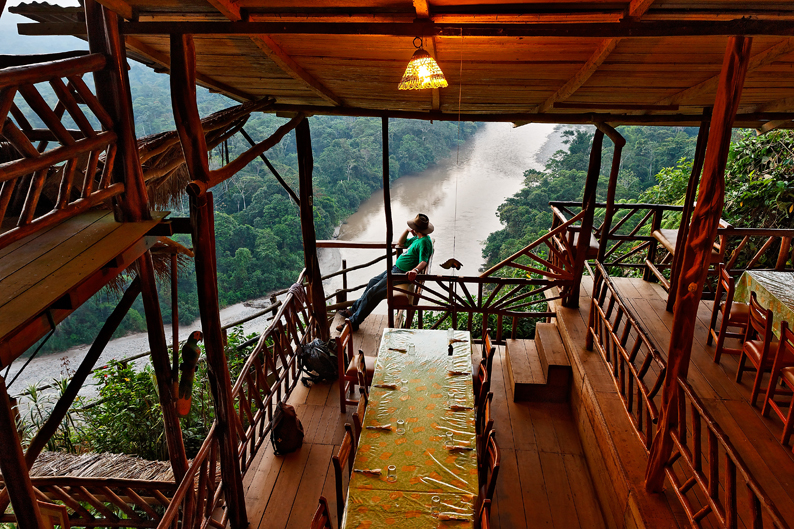 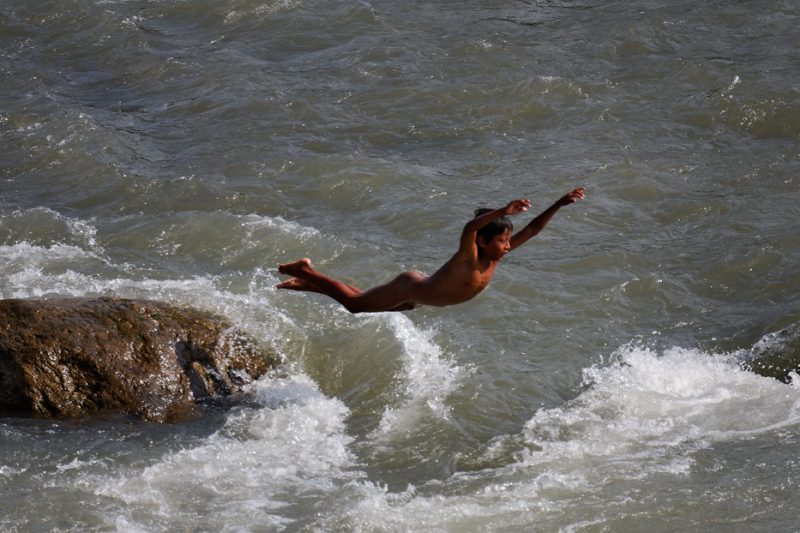 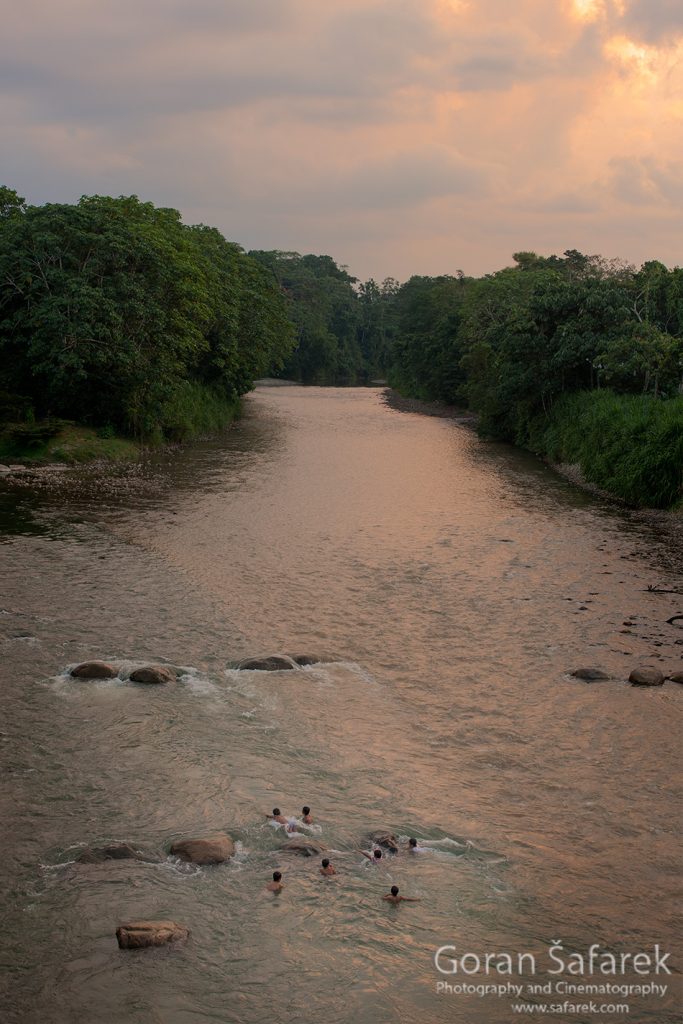 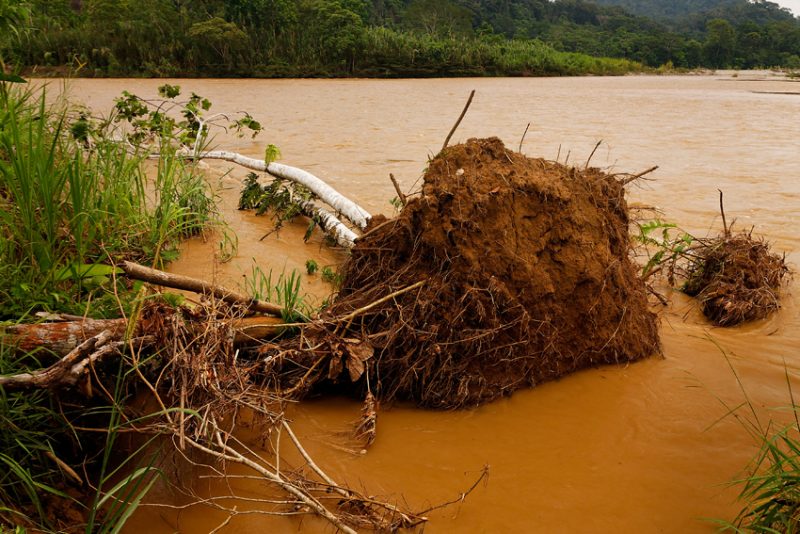 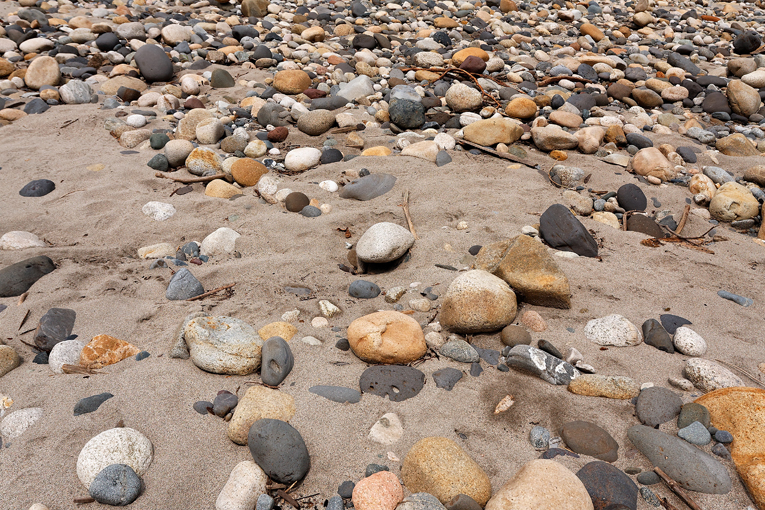 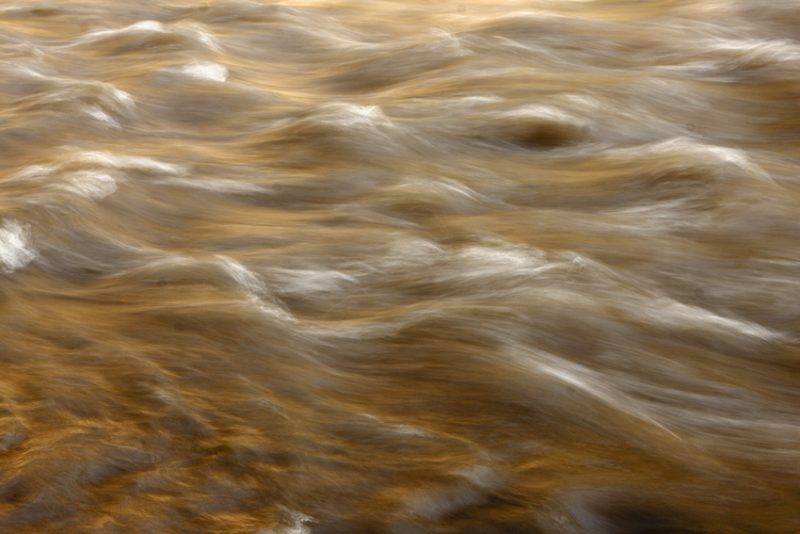 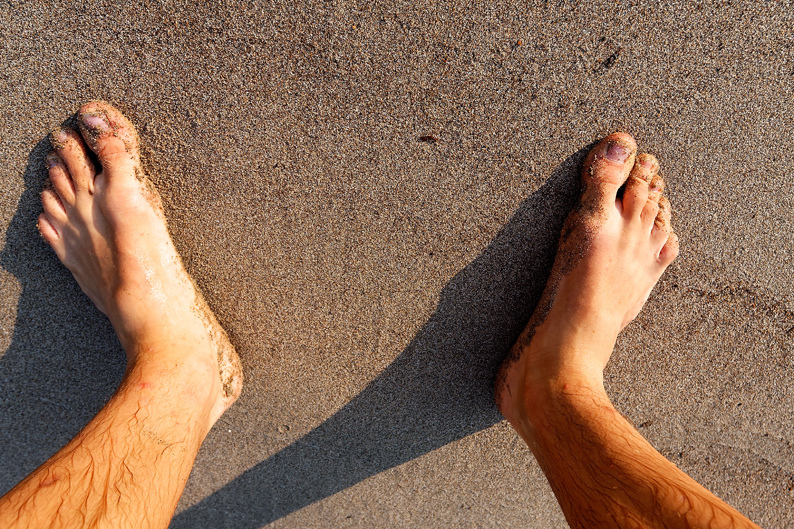 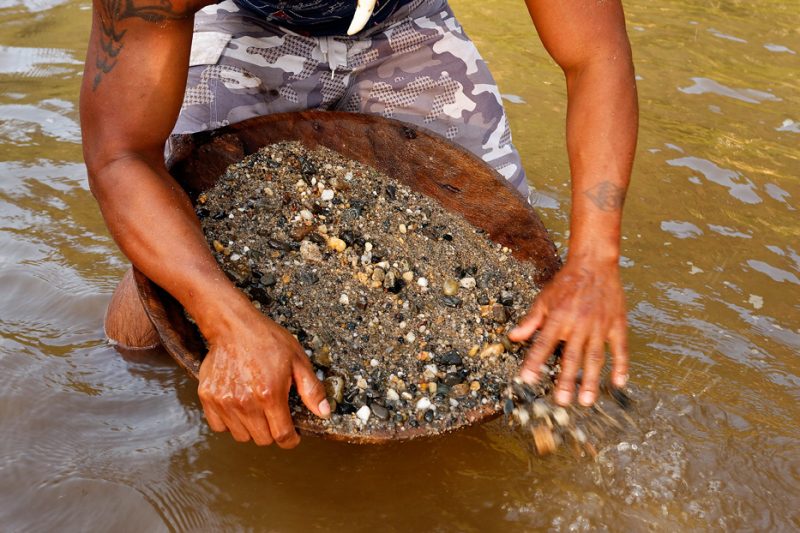 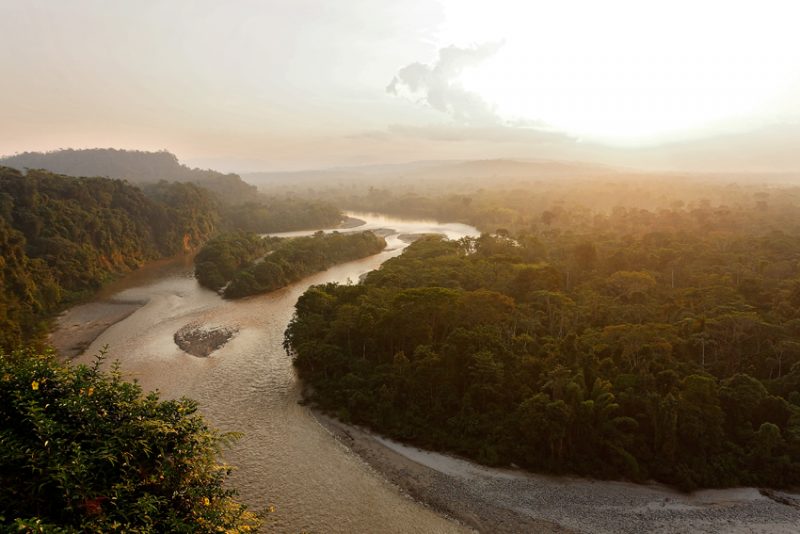 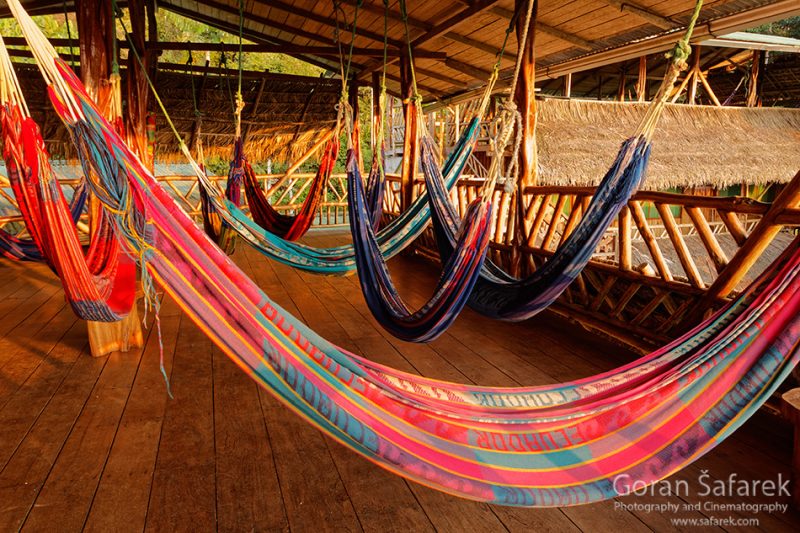 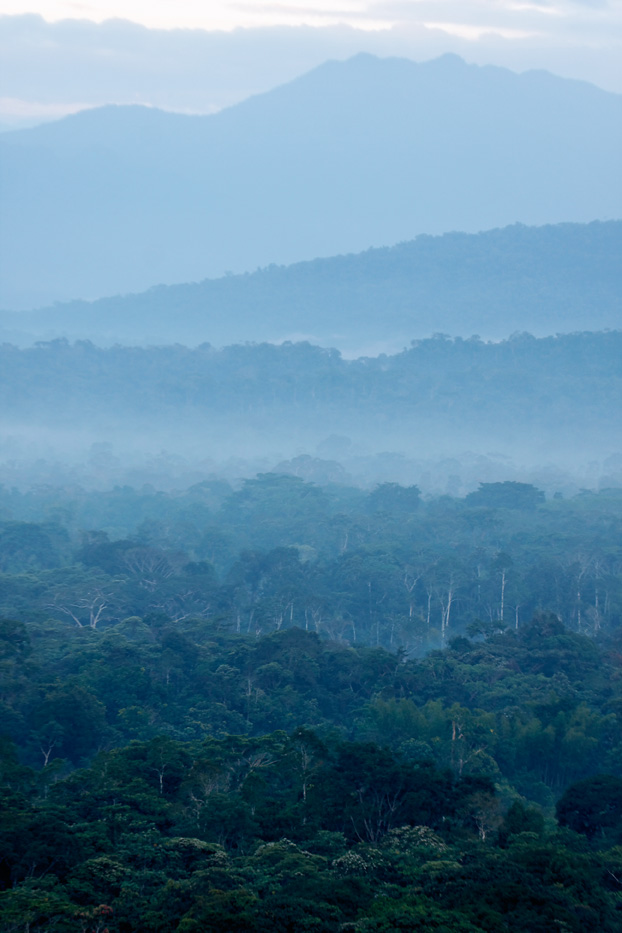 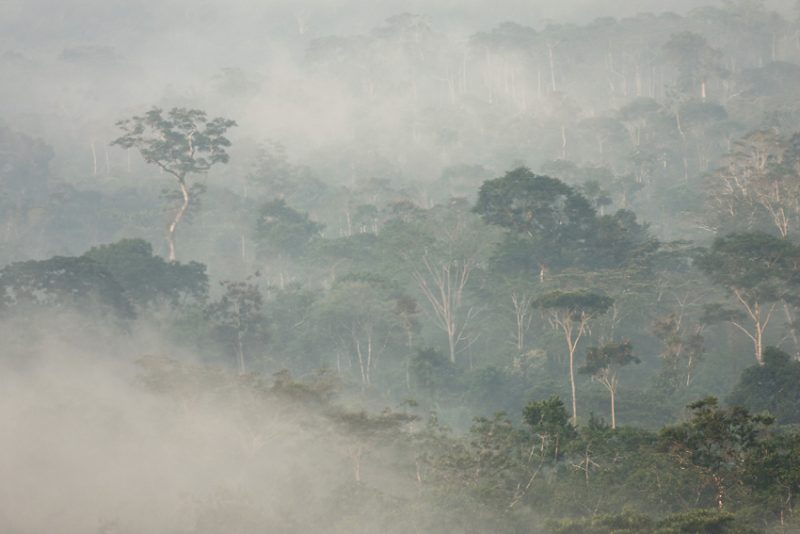 Flooded forests (swamp forests)
Tags: Amazon, andes, ecuador
Shuar Indians from Amazon – the keepers of the tradition living on the river
Canaima and Angel Falls – the realm of waterfalls