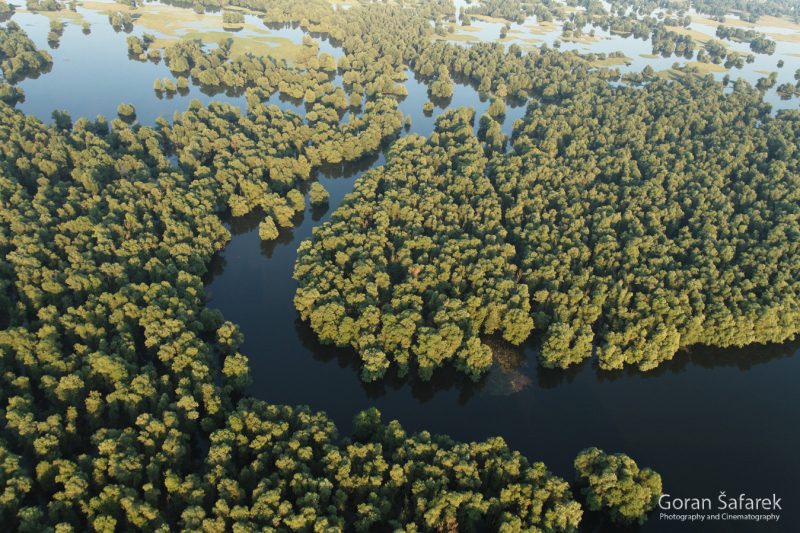 Floodplain flood forests (Freshwater swamp forests) are seasonally inundated by rivers. They are adapted to the long-standing water and host a variety of organisms.

Trees and other plants are adapted to the water, especially the inundated parts like tree roots. Some of the trees have aerial roots, called pneumatophores. These specialized aerial roots enable plants to breathe air in habitats that have waterlogged soil. The roots may grow down from the stem, or up from typical roots. Some botanists classify these as aerating roots rather than aerial roots, if they come up from soil. The surface of these roots are covered with lenticel (small pores) which take up air into spongy tissue which in turn uses osmotic pathways to spread oxygen throughout the plant as needed. Lenticel could also cover the trunk of the tree. There are other adaptations as well. 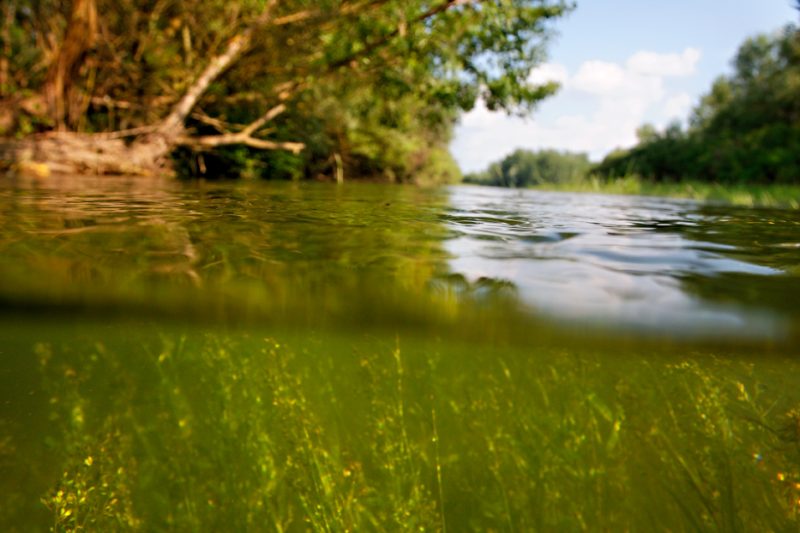 As the waters flows over river banks, aquatic organisms follow suit and navigate the forest forests to seek food or reproduce. Tiny organisms called zooplankton are consumed by fish and reproduction rate is highest during high water. When the flood recedes, zooplankton is carried by the flow and is distributed to many rivers, providing a much needed food base for a range of aquatic wildlife. Many fish can spawn only in this swampy conditions. 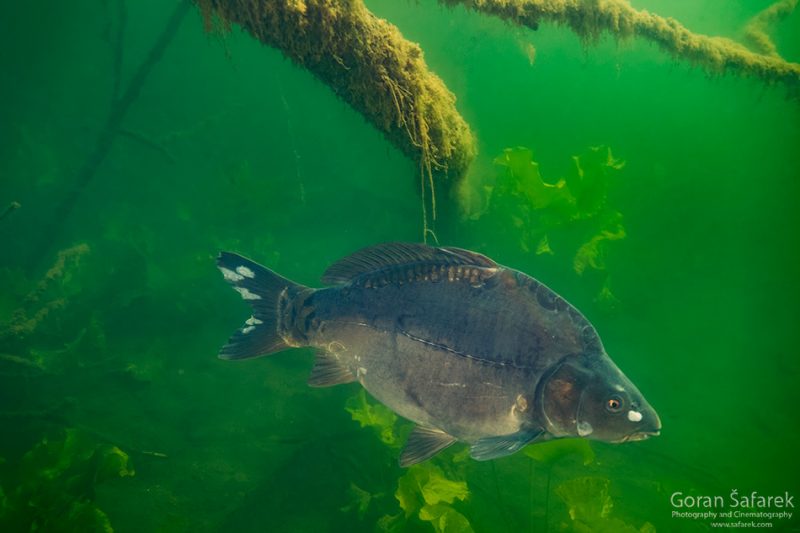 In Europe and North America, flooded forests once covered much of land around the lowland rivers. Only fragments remain of the extensive lowland forests as they have been converted to crops, settlements, industry, agriculture, etc. The few remaining lowland forests are mostly located along the preserved rivers.

In Central Europe, directly along the river we find flooded forests of willows and poplars. On the lowest parts, prone to regular flooding grow forests of White Willow (Salix alba). Above, but still within reach of the floods is a forest community of the White Willow and the Black Poplar (Populus nigra). Out of reach of the floods most of the years grow forests of Black Poplar and White Poplar (Populus alba). Besides surviving the floods, these forests are adapted to erosion too. Such softwood trees grow very fast and quickly recover from erosion. These forests are usually not managed due to the floods and lesser quality of the wood.

Old trees fall on the ground and rot, slowly becoming the humus in the soil. These forests are therefore biologically vibrant. In the summertime, these forests are almost impenetrable due to the dense vegetation and fallen trees. The soil is saturated with water, a condition favorable to willows which can stay in the water for a long time. Reeds (Phragmites australis) and sedges (Carex sp.) are abundant in the depressions.

Forest of the Common Alder (Alnus glutinosa) and the Common Ash (Fraxinus excelsior) are found further from the river. They can be flooded from the river too, but more often from the rain and snow and high groundwater levels. The Pedunculate oak (Quercus robur) grows above the flooded forest, but they too are adapted to survive brief floods. These are economically our most valuable lowland forests.

Vast flooded forests are still found in tropical regions. Amazon is both largest river and largest catchment in the world with the preserved nature. Every year, over 250,000 km2 of Amazon floodplain forests are inundated from rivers. Floodplain forests make up 3-4% of the Amazon Basin area and are highly productive riverside areas that are flooded during the rainy season, and which receive rich sediment from the Andes Mountains. 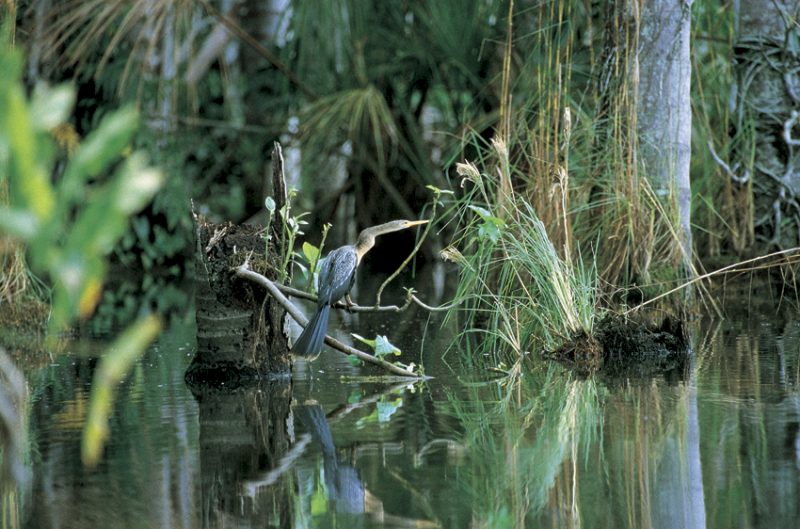 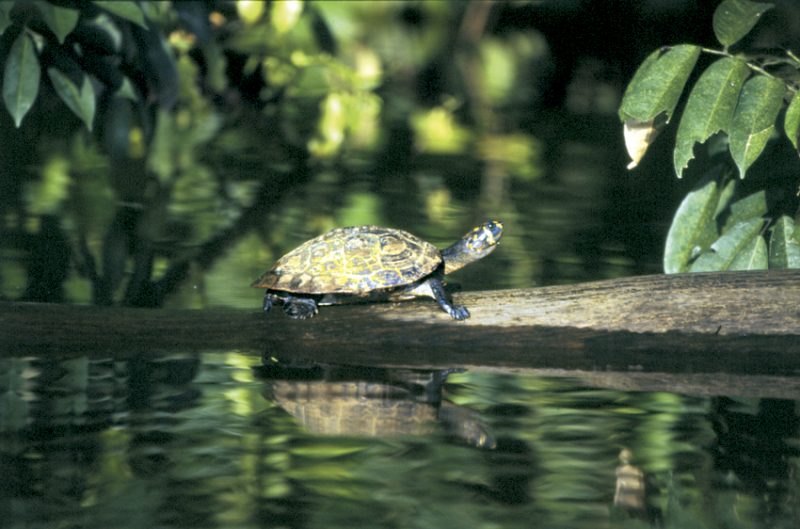 During the flood cycle fish have direct access to the forest, and many species are important fruit and seed consumers as well as seed dispersers. Certain monkey species, such as the pygmy marmoset and uakaris, are restricted to floodplain forest, as are many species of birds and arthropods. Some plant species are unique to flooded forests, though many have closely related species in dry forests, suggesting a recent speciation between dry and flood-plain species. For example, two species of closely related palms in the genus Astrocaryum are distributed such that one is abundant in flooded forests, while the other is found only on terra firme.

Swamps and inundated forests are found extensively in the Congo River Basin and it contains some of the largest areas of true swamp forest on the planet. Although these forests are not exceptionally rich in numbers of species, they support intact populations of several large mammals.