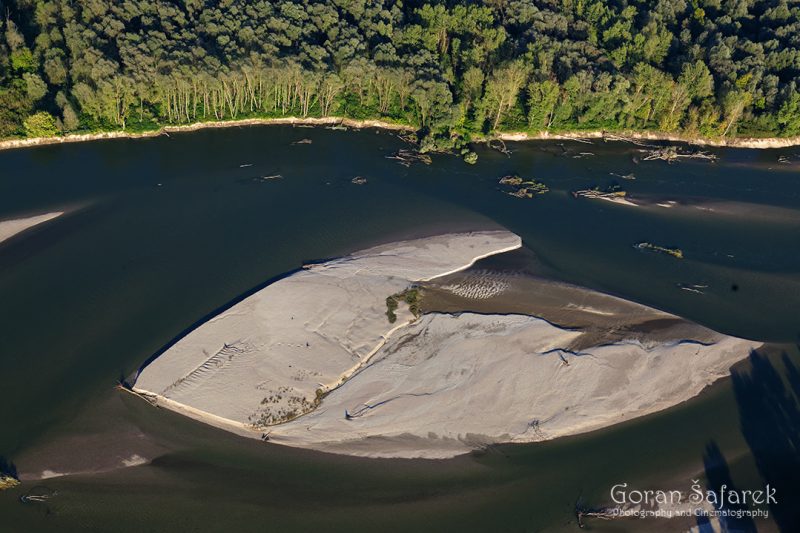 Gravel and sand bars are the layers of the sediment in the riverbed. It is not only the barren sediment; this is precious habitat for specialized animals and plants.

Bars are made of deposited sediment – gravel in the middle stretches of the river and sand in the lower.

Gravel bars are made of deposited sediment – gravel in the middle stretches of the river and sand in the lower. New or exposed gravel bars are soon colonized by pioneer plant species. They tolerate the extreme conditions – being scorched by the sun and flooded by the river, with a little of nutrients. They grow very fast. 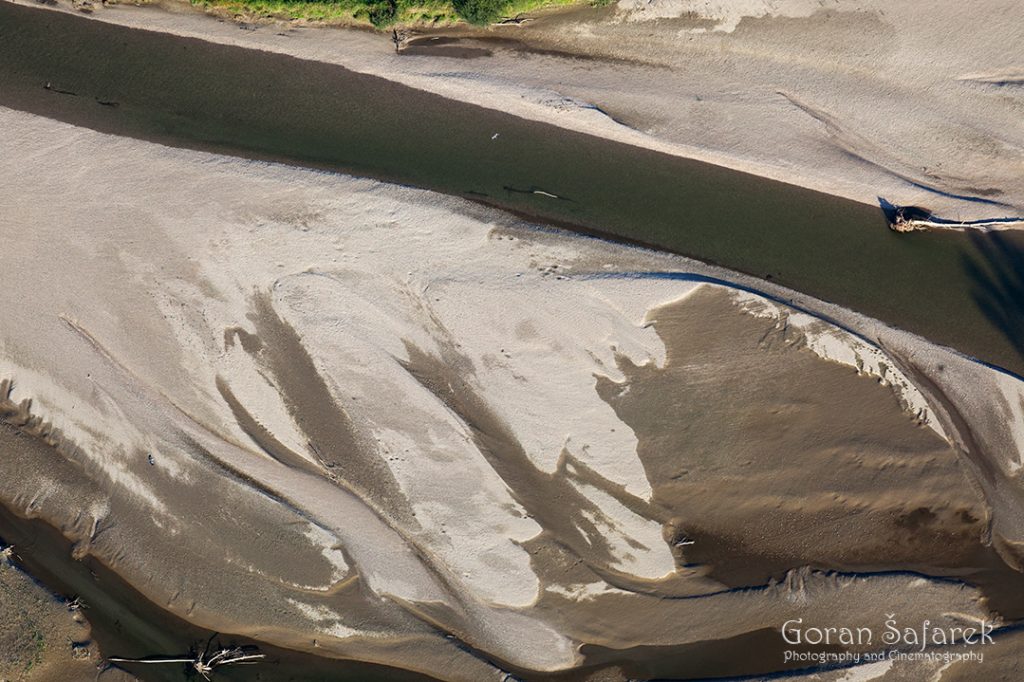 In Europe, early arrivals are the Water Mint (Mentha aquatica), the Knotweed (Polygonum sp.), the Dock (Rumex sp.), the Water forget-me-not (Myosotis scorpioides), the Great Yellowcress (Rorippa amphibia), grasses like the Reed Mannagrass (Glyceria maxima), Reed Canary Grass (Phalaris arundinacea) etc. Willows are true colonizers that can grow on barren gravel which they stabilize with their roots. The Purple willow (Salix purpurea), the Almond Willow (Salix triandra), the Bitter Willow (Salix eleagnos), but also White Willow (Salix alba) and both the Black and White Poplars (Populus nigra and P. alba) grow fast and make dense shrubs on the riverbanks. Those plants further trap sediment from floods. One of the rarest plants species is found on the Drava – the German Tamarisk (Myricaria germanica).

In the tropical Amazon, the pioneer species is the Cecropia tree. Cecropia latiloba can be considered to be one of the most efficient colonizers of open areas in the nutrient-rich whitewater floodplains of the Amazon river. Its primary strategy to be successful is the high tolerance towards waterlogging and submergence, and the fast vertical growth and reiteration capacity. This, and the tolerance of high irradiation and sediment deposition allow C. latiloba to form large monospecific stands on open sites, and thus the first closed canopy which represents the initial phase of a successional sequence which leads to highly diverse forests. 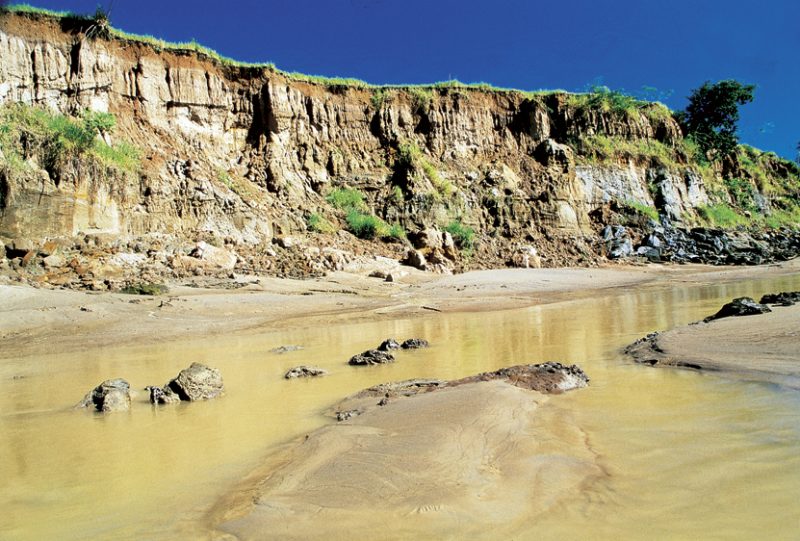 If they are not washed or destroyed immediately, these plants start the succession cycles. They trap the finer sediment; make the soil and room for other plants. Colonizers are replaced and squashed by later arrivals – shrubs and finally the trees (if climate allows). Coupled with wetlands, also created by the river dynamics, a mosaic of habitats is created.

Read more about How dynamic river is a boon for the diversity.

Many animals come to feed on these newly exposed habitats. Birds, otters, crocodiles and other hunters look for fish or invertebrates.

River bars are habitats for birds that nest on barren or lightly overgrown gravel. Most of these birds are confined to islands in the river, out of reach of land predators like foxes. The Common Tern (Sterna hirundo) is a slender white bird with pointed beak and elegant, long wings and tail. They hunt small fish by plunge-diving. Terns nest in colonies with dozens of pairs. They scrape a small hollow into the ground with their feet and lay 1 – 3 eggs. Parents aggressively defend the eggs and the chicks. Sometimes the tern colonies include the Little Tern (Sternula albifrons). This once widespread species is endangered now because of habitat loss from river regulation and gravel extraction.

The Little Ringed Plover (Charadrias dubius), a small bird the size of a lark, has similar nesting habits. However, it doesn’t nest in colonies like terns. Females lay 3 – 4 eggs, very similar in size and color to gravel so it’s very difficult to discern them. Plovers hunt on the bars, looking for insects and other invertebrates washed from the river. Somewhat bigger is the Common Sandpiper (Actitis hypoleucos). It walks on the edges of the banks, picking up small invertebrates with its longer beak. Their nests are located in the overgrown parts of the islands, often hidden within the vegetation.

Other animals too use the bars for the reproduction. Many turtles from the tropical regions lay their eggs on a sandbar. The largest neotropical freshwater species, the Giant Amazon River Turtle (Podocnemis expansa). Weighing up to 65 kilograms (143 pounds), P. expansa is a species of side-necked turtle — retracting its neck horizontally as opposed to vertically like other species. It has a large domed shell adapted to swimming in river currents, but it also inhabits lakes and flooded forests during the rainy season. When it’s time to lay eggs, the turtles move en masse to their nesting beaches and sandbars. 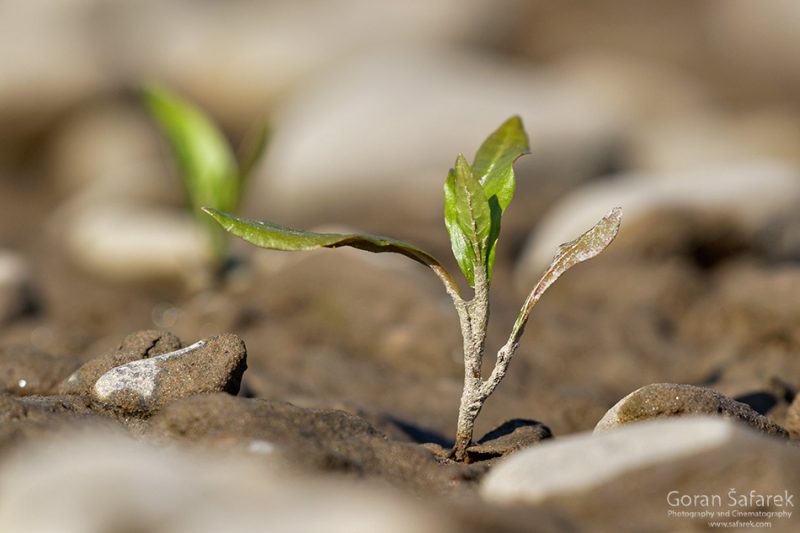 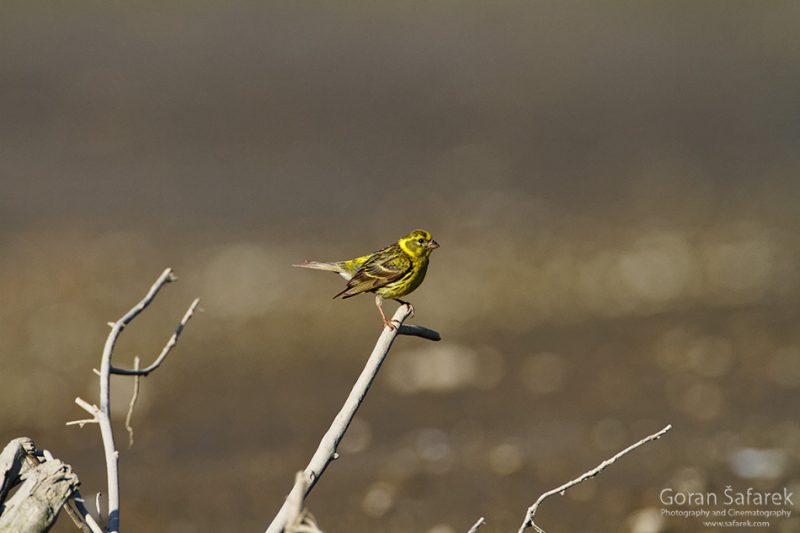 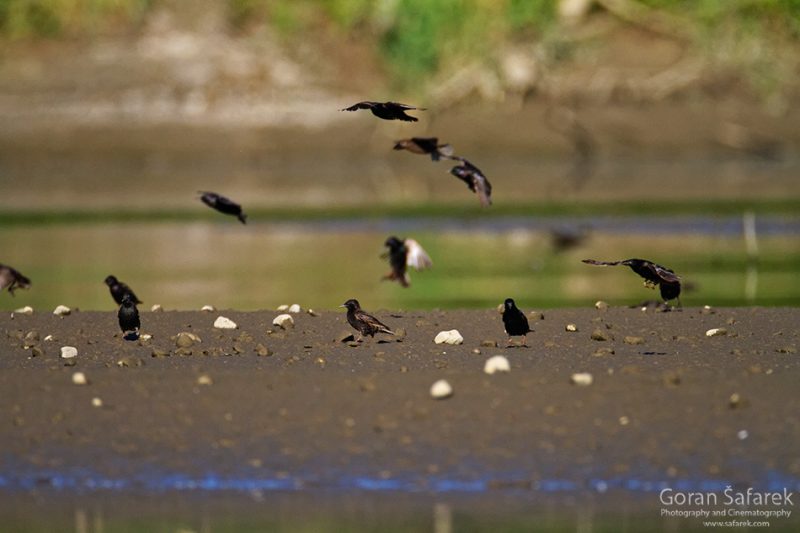 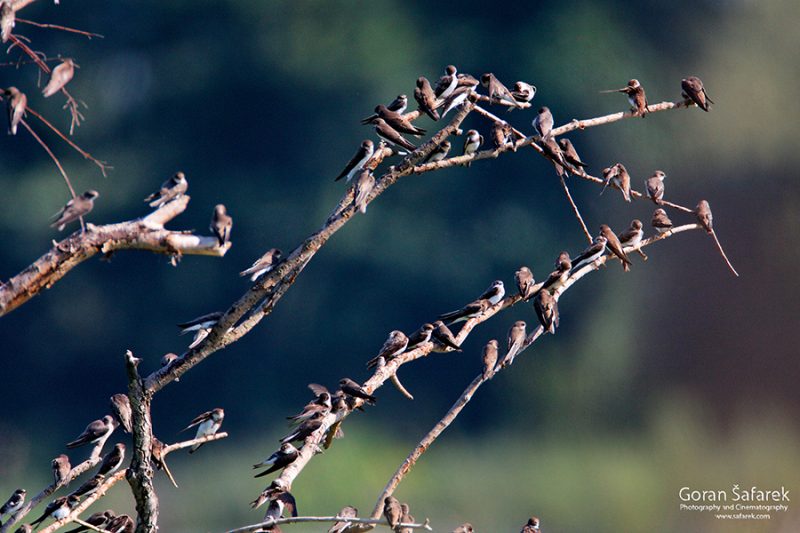 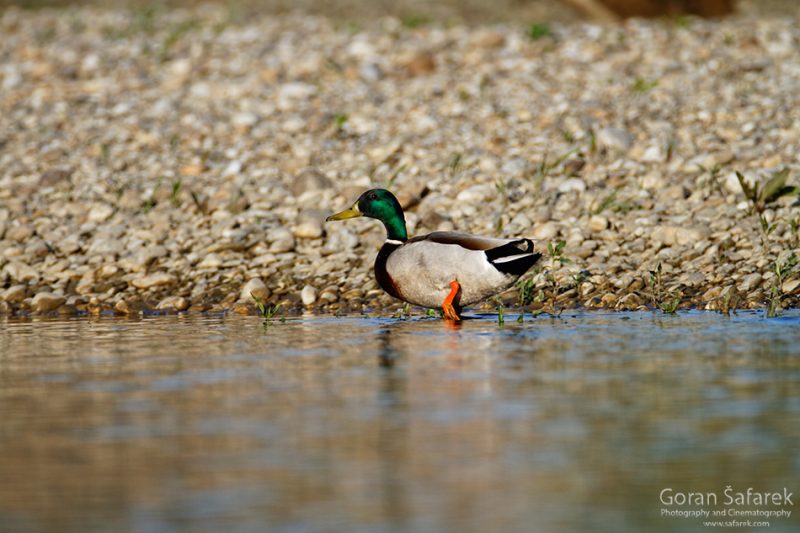 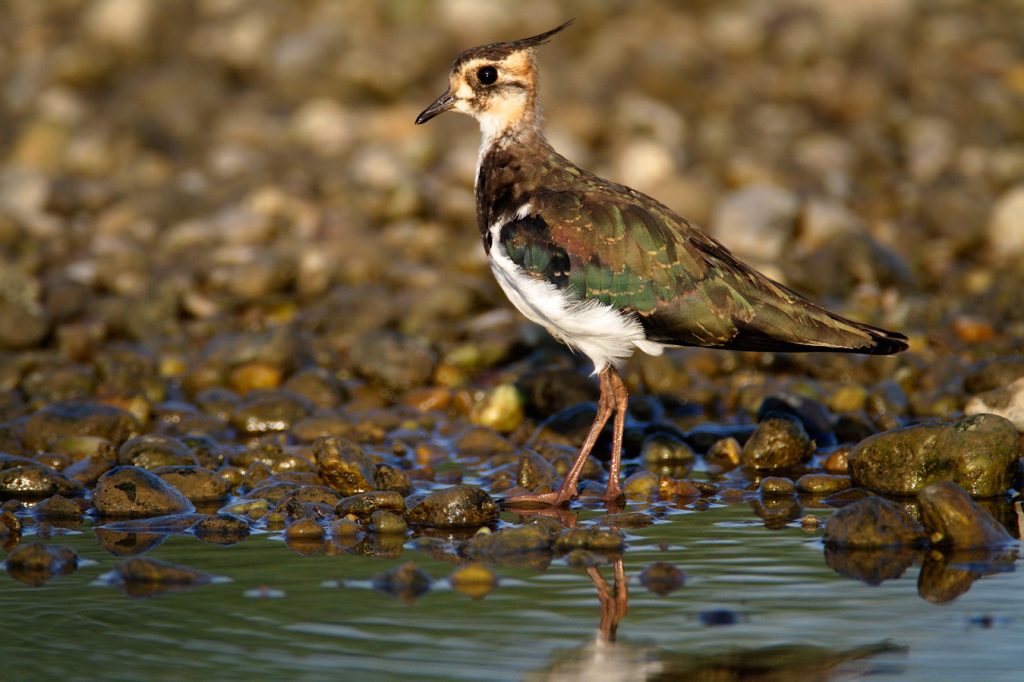 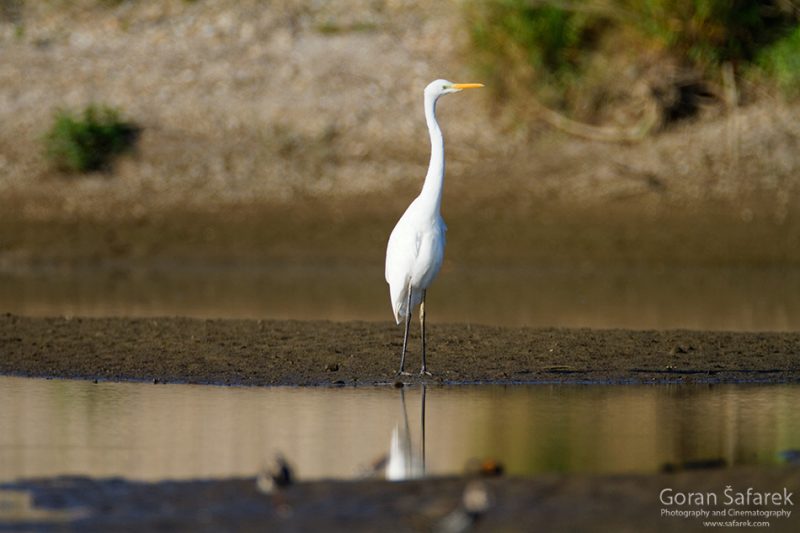 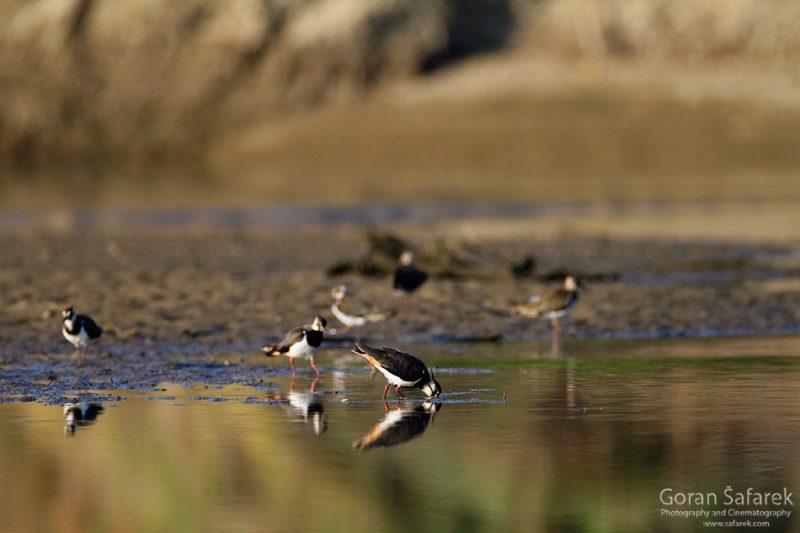