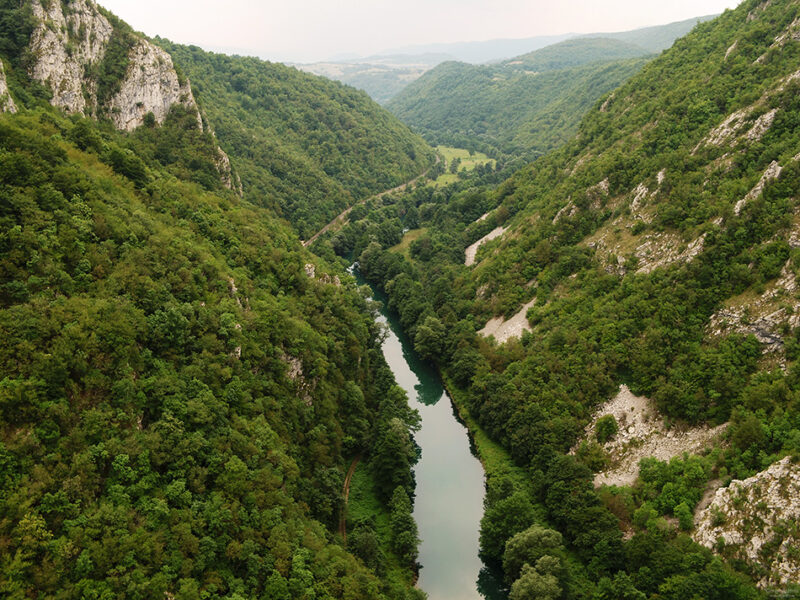 The rivers or streams, in general, have the energy to erode (and transport the sediment) the riverbed. Whenever the stream flows through the rock, especially in higher altitudes, the river will cut the bedrock. If the rock is more resistant than it becomes a narrow canyon. However, mass wasting and sheet erosion remove the rock and sediment from the stream channel so, a stream widens and lengthens – becoming a more common V-shaped canyon valley. The stream actively deepens a valley through a process known as downcutting.

Downcutting has a limit called a base level. For tributaries, it is a level of the stream at the mouth. In the case of sea mouth, sea level becomes the lower limit of downcutting.

The river cannot cut below the base level, as it would have to flow uphill. For most streams, sea level controls the level to which the land can be eroded. Exceptions exist from this rule, though, in the case with levels for streams that do not flow into the sea. The base level in Death Valley in California corresponds to the lowest point in the valley, 86 meters (282 feet) below sea level. Most of the streams in higher elevation are well above base level, resulting in that downcutting can be strong, also depending on the rock strength. Naturally, as the stream approaches base level, the downcutting slows down.

Ice ages with fluctuations in the sea level caused the base level to rose and fell. As a result, the downcutting “went deeper” during the low sea level, while deposition dominated during high sea level.

At the early stages of the downcutting, the longitudinal profile of the river is mostly irregular with rapids and waterfalls along its course. Such a river, (termed ungraded) is using most of its erosional energy in smoothing out these irregularities. As the stream smooths out its longitudinal profile, it becomes graded.

Today, valleys are sometimes heavily influenced by people. A rather flat bottom of the river valleys is an only suitable place in steep mountains for settlements, agriculture, industry, roads, and railway. Rivers are often regulated to reduce the floods and erosion, or dammed for electricity production.