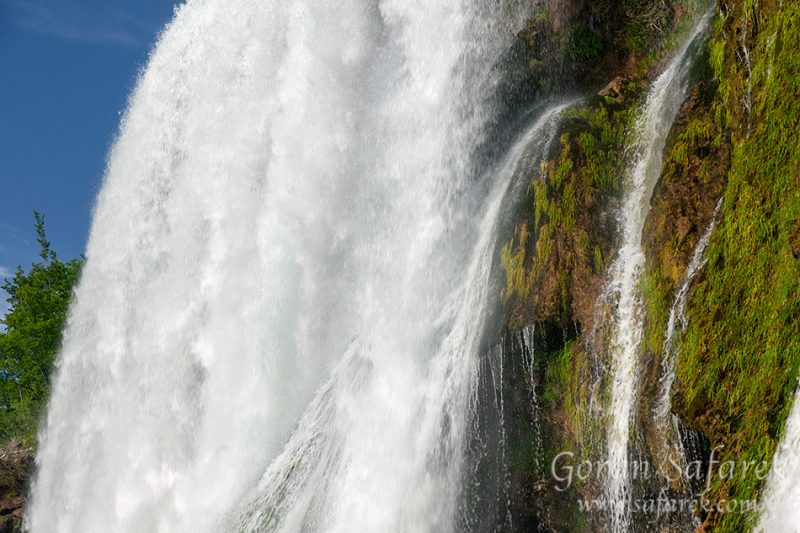 Waterfalls are often the most beautiful parts of the river. Learn how they are formed and how do they function.

Rivers are oases, centers of the biodiversity, borders and fill many other roles. Visually, they are not always strikingly spectacular to most of the people. Only a few can understand and admire the intricacies of geology, hydromorphology, etc.

See how waterfalls look inside!

See our list of the TOP 10 most beautiful waterfalls in the world!

The main driving force for waterfall is gravity. After all, all waterfalls tumble down to the center of the Earth gravity, id.e. down. Geysers, for example, flow upward for a short period, as a result of the pressure inside the Earth crust.

Waterfalls (also rocky rapids) often occur at a particularly resistant rock band over which one the rivers fall. Otherwise, the river would erode its bed, and it would end up more as a rapid. The softer rock (sandstone, for example, erodes, leaving a hard ledge (granite for example) over which the stream falls. They are common in upland areas.

The waterfalls are often the sites of considerable erosion. A stream’s velocity increases as it nears a waterfall, increasing the amount of erosion taking place. Rushing water and sediment topple over the waterfall, eroding the plunge pool at the base. The crashing flow of the water may also create powerful whirlpools that erode the rock of the plunge pool beneath them.

Not fixed in space

The resulting erosion at the base of a waterfall can be very dramatic and cause the waterfall to “recede.” The area behind the waterfall is worn away, creating a hollow, cave-like structure called a “rock shelter.” Eventually, the rocky ledge (called the outcropping) may tumble down, sending boulders into the stream bed and plunge pool below. This causes the waterfall to “recede” many meters upstream. The Niagara waterfall is known for this kind of erosion. Historically, the rate of erosion of the falls has been around 3 feet per year. However, since 1942, the rate of erosion has reduced. Anyway, during the last 12,300 years, it has eroded 11.4 kms.

Altitude gradient, barriers, and flowing water are prerequisite for waterfalls.  Waterfalls are thus commonly found in the upper stretches of the river, where the slope is substantial.

Harder rock could also make an obstacle in the riverbed. Obstacles in the riverbed cause the overflow with waterfalls, even though the slope doesn’t have to be great.

Some barriers on the rivers, over which waterfalls tumble down, are “living.” It is so-called phytogenic tufa, a type of limestone rock that grows very fast.

Man-made barriers are also the source of the waterfalls. Built for various purposes, the construction of watermill, for example, and waterfalls are just byproducts.

Largest waterfalls on the world

Inga Falls on the Congo River (Democratic Republic of Congo), discharges estimated 25,768 cubic meters per second (910,000 cubic feet per second). One of the widest waterfalls is Khone Phapheng Falls, Laos. The Mekong River flows through a succession of relatively shallow rapids, in a riverbed about 10,783 meters wide (35,376 feet). Angel Falls is the world’s tallest waterfall, plummets 979 meters (3,212 feet) into a remote canyon in a rain forest in Venezuela.

Valleys
Tags: waterfalls
TOP 10: The most beautiful waterfalls of the world
The canyons – high walls above the rivers