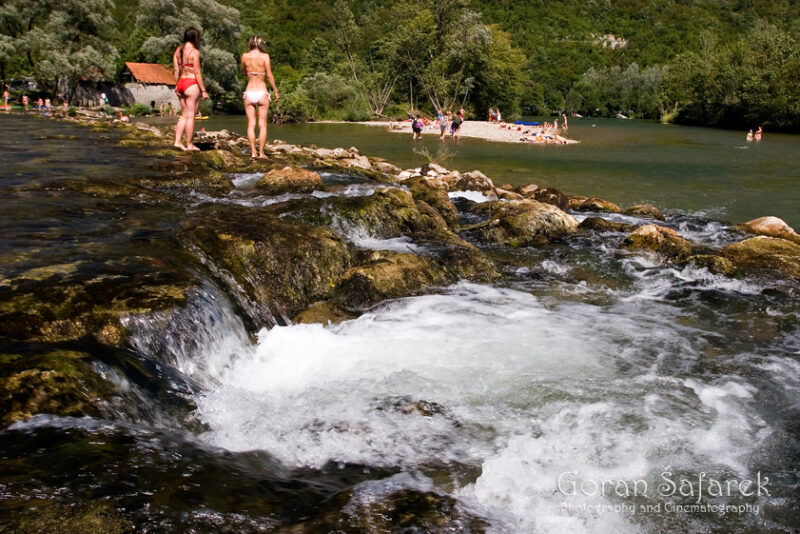 The Kupa / Kolpa River is a medium-sized river in Slovenia and Croatia, flowing in beautiful mountains in upper stretches and meandering in the plains.

This river is called the Kupa in Croatian, while Kolpa in Slovenian. Even though it springs only 10 km from the Adriatic sea, its water join the faraway Black Sea, through the Sava and Danube rivers. From the very beginning, the Kupa is a natural

The Kupa is born deep under the surface of the ground, collected from the vast area of the Risnjak National Park. Forested karstic peaks are just top of the dense forests of the beech and fir, bathed in rain and snow. These mountains are the wettest place in Croatia, with over 3000mm of precipitation. And all this water seeps through the porous limestone rock (called karst) and enters the deep underground spaces. It forms the lakes, even streams, and at some places, under pressure is forced back to the surface. Such is the case with the Kupa, where water surges upward in a siphon almost 200 meters deep.

The top of the siphon is a small serene lake, below 300 meter high vertical cliffs. It forms the quiet lake source, where water flows downstream in a series of the rapids, deep in forest shade. Early spring brings snowmelt and rains, causing the torrents, while in the summer, the river display at places is the rocky bottom. Thanks to the mountain paths, it is possible to reach the upper part of the Kupa from two directions (see the Kupa source)

Here, in the upper reaches, the chief resident of these clear, cold waters is the brown trout, while the grayling appears downstream, about where the huchen (Danube salmon) stretches also begin. The source itself is home to the grayling too.

After the source, Kupa flows a few kilometers on the slopes of the Risnjak mountains toward Slovenia, where receives the small Čabranka River from the left. Here, The Kupa gets his called Kokpa as well and becomes a border. In the early spring or autumn, rafters ride on the rapids and waterfalls. The Kupa / Kolpa forms a broad forested valley. It still flows over the rapids but also bouncing across waterfalls. These waterfalls are mostly human-made barriers made for the watermills, usually one on each side of the river. Before electricity, these mills were of great importance for a local population.

Today’s local community visits the river mostly in summer to enjoy the fresh but still pleasant water on hot days. Pebble bars are perfect natural beaches, even for the youngest. Several camping places offer a longer stay and intimate experience of nature. These camps are on the left, Slovenian side, that is more flat terrain. The Croatian team is less populated, owing to the steep slopes of the valley. The wilderness is welcomed by wild animals that are never far, like herons and ducks.

The Kupa / Kolpa continues eastwards between the White Carniola region in the north and Central Croatia in the south. The Kupa receives influx from the river Lahinja from the left in Primostek, passes Vrbovsko, and eventually leaves the border having given Metlika. The old town of Ozalj overhangs the Kupa on its way to the plains.

It then reaches the city of Karlovac, where it receives influx from two other rivers from the right, Dobra and Korana (which in turn is joined by Mrežnica). The Kupa is now a real lowland river, meandering through continues flowing to the east, where it merges with Glina from the right as well as Odra from the left and proceeds to the town of Sisak where it flows into the Sava River.