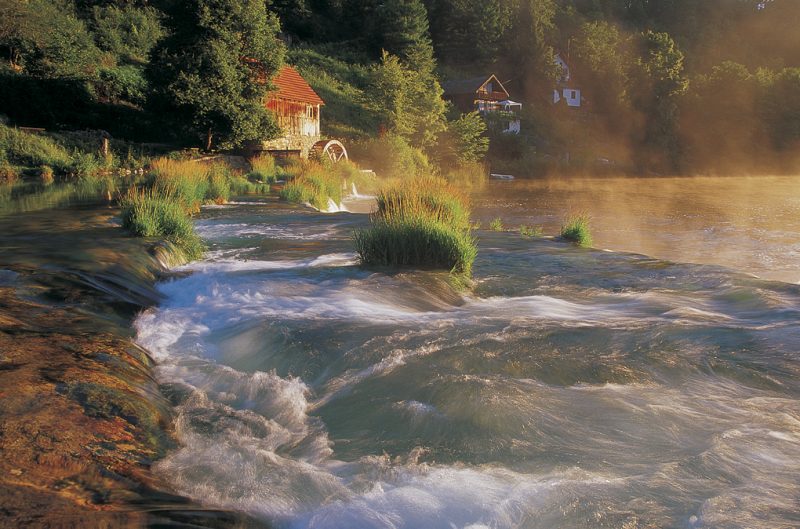 Despite being known all over Europe for their unspoiled waters and natural wealth, the rivers of Croatia have still not received the recognition they deserve. The Mrežnica River is one of those net gems of Croatia, whose tufa cascades remain hidden deep in an inaccessible canyon.

Your mind wanders aimlessly on a southbound car or train journey through the hilly part of Croatia, when an elusive image flashes before your eyes for a brief instant; a glimpse of a green river in the distance, rushing towards step-like cascades and spilling over in a myriad of spurting bubbles. On a hot summer day, who would not be tempted to dive in and find refreshment? The idyllic scene is not deceptive. And certainly not a one-off: the road runs parallel with the river Mrežnica, in the eyes of many the most beautiful Croatian river, adorned by water-spurting cascades arid waterfalls squeezed within its well hidden canyon.

The Mrežnica is not the only Croatian river that holds the right to be called clean and unspoiled; it does, however, boasts a karst phenomenon – the tufa waterfalls, just like the world-famous Plitvice Lakes. And while the well-loved Adriatic Coast is full of tourists, some rivers remain sanctuaries of wild nature and serenity as the best hidden Croatian secrets.

The Mrežnica River – river with 100 waterfalls

The Krka Waterfalls are a regular tourist excursion spot: organizers of rafting holidays have tapped into the Zrmanja River; and nature lovers and adventure seekers have discovered the Ulna, the Cetina and a few other rivers in Lika and Dalmatia. Although wonderfully preserved and beautiful, the Mrežnica still remains pretty much off the beaten tourist track. 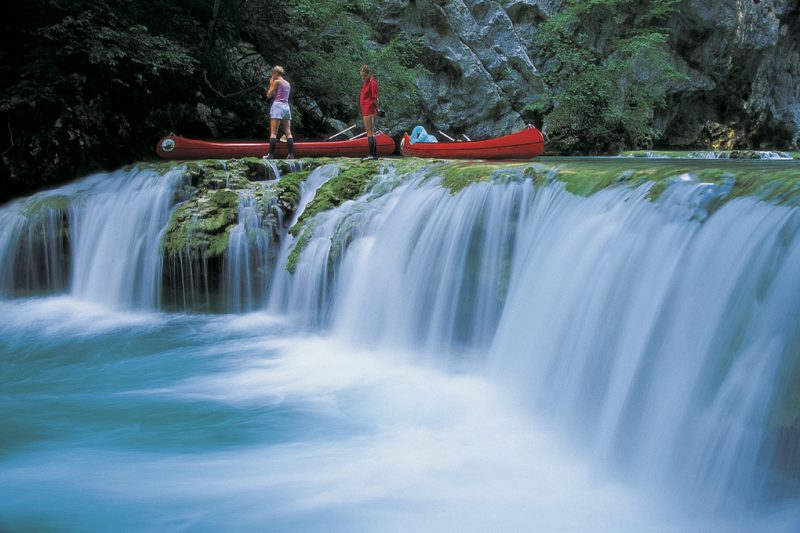 The Mrežnica course starts at its source near Slunj, and ends near Karlovac where it merges with the Korana . The first thirteen kilometres of its  course axe off-limits to the public because of the military polygon near Slunj, but even after that, th river remains largely hidden to the public eye as it continues to meander through the hilly arid sparsely populated Kordun. Only the bravest and most skilful daredevils have had the privilege to take their boats down that port of the river and challenge its rough waters close to the spring, in the shades of dark stone walls and high waterfalls. 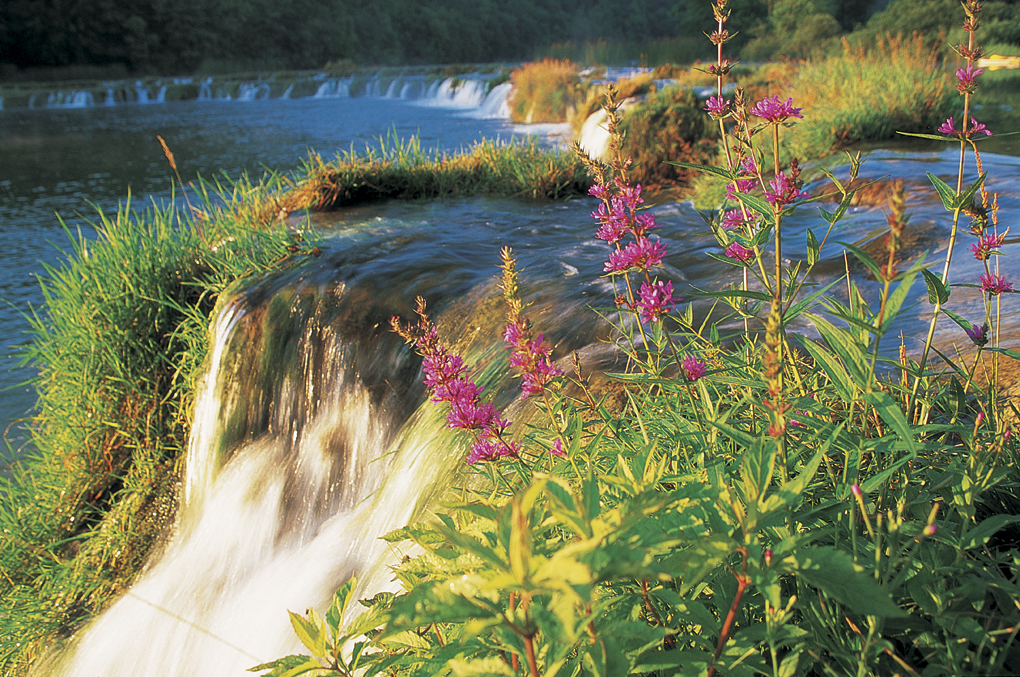 The river canyon widens after the bridge in Tržac and its hitherto unbridled flow becomes somewhat less ruffled. Gradually, smooth stretches become longer; cascades appear at rather more regular intervals, in a recognizable crescent shape. As the river becomes more placid, its charms become more readily available to the world.

Mrežnica is one of our TOP 10 natural spots in Croatia. Mrežnica waterfalls are also on the list of the most beautiful Croatian waterfalls.

While hordes of tourists rush towards till seaside, the Mrežnica River does not spring to mind immediately as a possible holiday destination. That is why the fortunate few who have beaten the crowd and got here fast can still enjoy the peace and quiet and observe the river at their leisure. The colour green reign as far as there can see: leafy woods reflect in the water, but the radiant emerald hues come by and large from within the river itself. Its surface is as smooth as glass; the fallen ‘eaves, seeds and other dry remains of the surrounding vegetation repose peacefully and listlessly as if frozen on its surface. 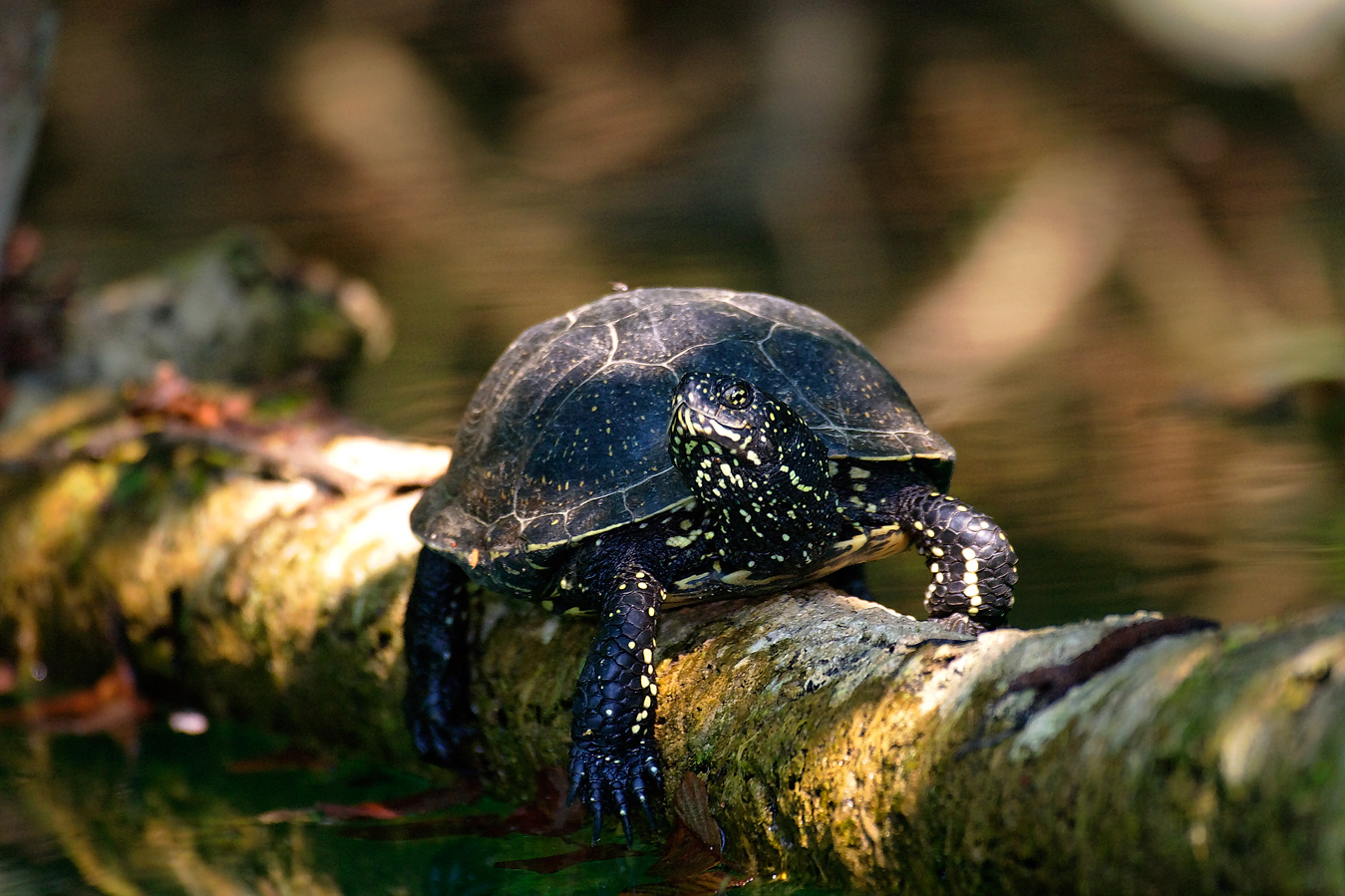 A wing-flutter away from the river surface, swallows perform their silent and effortless stunts in pursuit of insects. In the middle of the river, there is a small island, a grove of vegetation pushing hard for space where there is little of it to be found. The oar-like willow and alder tree roots stick out of the water in any odd direction, with more than a few of them aiming back for the water. A pond turtle still finds a pleasant sunning spot amongst the maze of roots. The white speckles against the dark background of its shell blend perfectly with nature and would give the turtle just the right disguise were it not for its red eyes sparkling in the sun and blowing such a perfect cover.

The river banks have not been spared the far-reaching green tentacles of vegetation; on the contrary, they are in the firm grip of the reeds and other aquatic plants. The water surface is invisible underneath a carpet of round water lily leaves, anchored to the soft muddy bed with their long and very strong hollow stalks. At the beginning of summer, the water surface explodes in the yellow colour of the flowers. 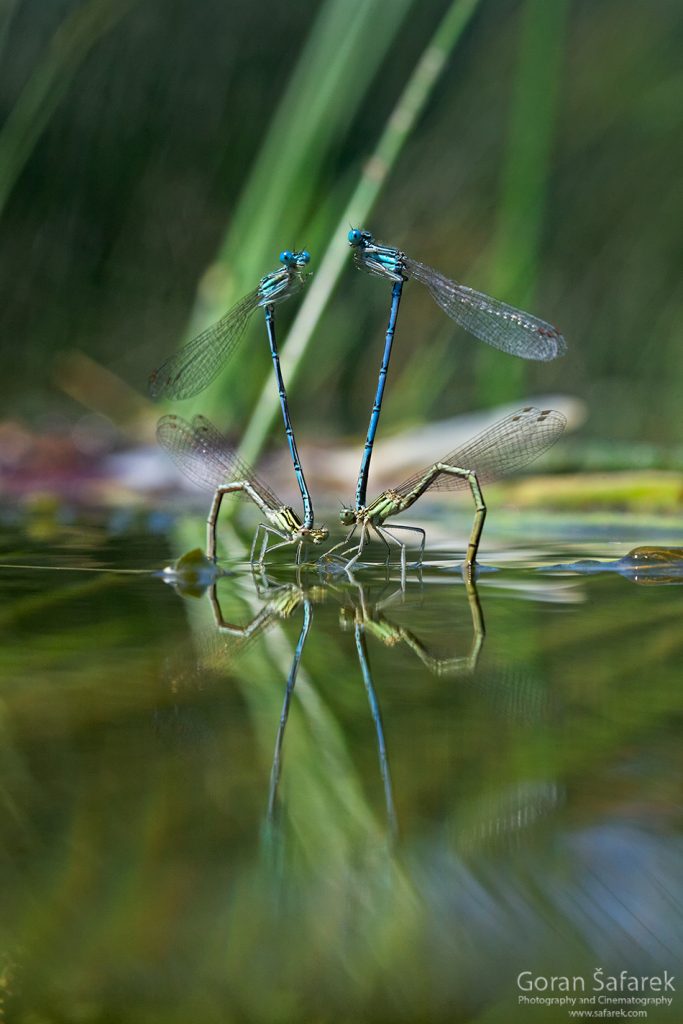 There is more to these flowers than sharing their beauty with the world: they are the ideal platform for the frantic dance of another cal pond insect – the dragonflies and damselflies. A few couples will land on the pad of the yellow water lilies, the females in the firm grip of the males. The rest of the escadrille remains being above the water surface or are indeed already busy laying eggs which will then continue developing at the river bottom. The larvae will inhabit the riverbed until next year, until the moment when they are ready to swoop into the sky and thus close the circle of life.

At this place, the river is very shallow and almost at a standstill, so much so that it becomes a small swamp. A dice snake crawls slowly and lazily among the leaves. When hunting its prey, it turns into a skilful diver who can stay under water for a long time. Their main preys are small fish, frogs and insects. The grey heron may be seen standing listlessly on a branch, focused on its prey. 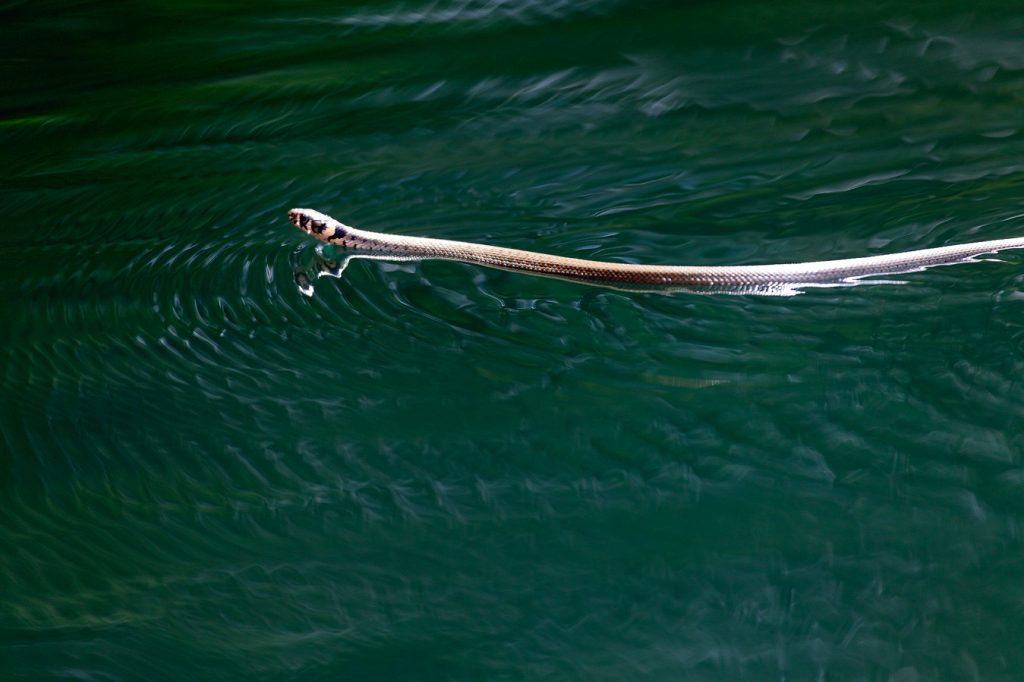 A few hundred metres further down the stream, the Mrežnica experiences a complete metamorphosis as it reaches a gently curving barrier spanning its banks. Quite unexpected, the hitherto languid river hurtles over the cascade and all of a sudden the dreamlike and the green lullaby comes awake in white foamy cascades; the river is anything bull peaceful and quiet here, where nature has tried to obstruct its course. 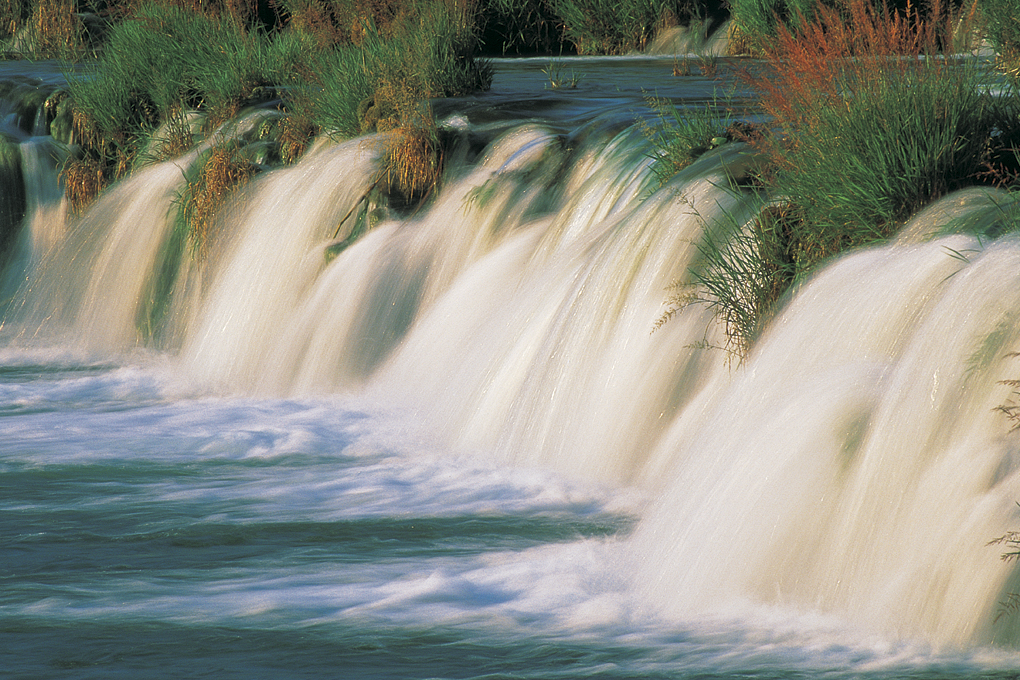 Some water cascades are simple; others drop over several shallow cascades. Parts of the barriers are dry, covered with reeds and high grass, shrubs and even smaller willows and alders. The barriers appear every several hundred metres, damming the river flow. Besides creating cascades and waterfalls, they slow down the river’s flow, basically forming the flowing lakes. The main culprit is the travertine or tufa, the miraculous substance that transforms the karst rivers of Croatia into a world-wide attraction. The most famous, but not the only ones in Croatia, are the travertine creations at the Plitvice Lakes. 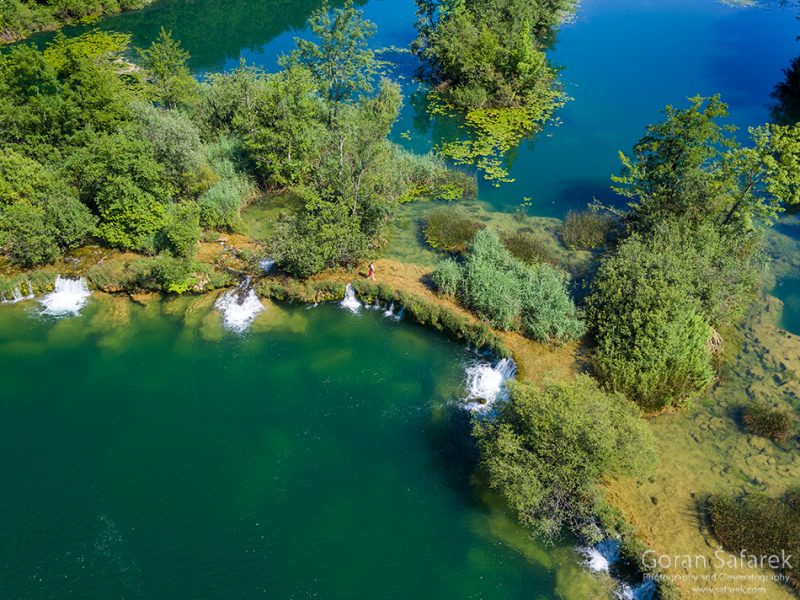 On the Mrežnica, the tufa is still well preserved, especially ii its inaccessible canyon. There is no good reason why the Mrežnica should not be recognized as a natural landmark, just like some other, more popular Croatian tourist destinations. The cascades on the Mrežnica may not be giants like those in the Plitvice Lakes, but their number, close to a hundred certainty makes up for the lack of size. The highest is the fifteen-metre Šušnjar followed by the eight-and-a-half-metre Milkovića waterfall. The others are also known by names such as the Rončevića waterfall, Jagodića waterfall, Klarića waterfall etc. The most beautiful waterfalls can be reached only by boat, which is an experience iltself.

The sound of paddles breaking the water resounds against the silence that reigns on the river. In the middle of its course, the Mrežnica shows us its best and the most recognizable face. The river keeps on meandering, curving left and right, following the canyon in the fashion of an old Dalmatian street. In places, bare grey rocks seem to be rising straight from the water; elsewhere, there is even enough room for long narrow strips of fertile land. Now and again, a milky green rock covered with the reeds rises from the depth, as if the reeds were growing friom the water, right in the middle of the river. Actually, it is shallow part of the river,  the underwater rock is what remains of the former travertine barrier, now mostly below the surface. At other places, a huge chunk of a rock slips out of the water creating tree-covered islets.

In the past, waterfalls were not just objects al admiration. People actually used them to harness the waiter energy necessary to power the watermill wheels. Watermills were once a lucrative business. Often, there were two on one waterfall, each on one of the banks. There were as many as three wheels under one roof, and each had the different owner. Thus, several families would share one Watermill. That does not mean that all of them worked all the time, but rather as demand required. When the watermill owner spotted a cart approaching, he would rush down the canyon to raise the sluice and start the watermill running. After World War II, these watermills became redundant. Not only was the population depleted, but they were gradually replaced by electricity-powered mills. 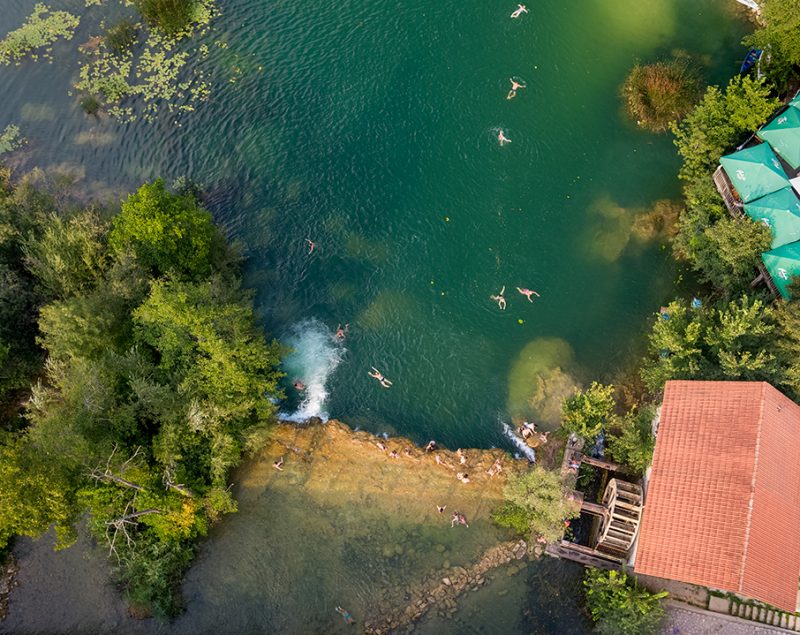 The river also served for small-scale transport which was operated with flat-bottomed boats, about four metres long and about a metre wide. You can still see them today, moored next to the colourful plastic canoes. The mills on Mrežnica are but gone, and the few that still remain are in a deplorable state of repair. Some thirty of them have teen reduced to no more than bare walls and foundations. A dozen or so are still used but not for their original purpose. They have been converted into hydro-electrical plants, restaurants and private holiday homes. Some have been given a new lease of life as tourist facilities catering to city dwellers who long to escape from the smog and noise of polluted cities. With comfortable holiday homes springing along the steep slopes of the lower course of the river Zvečaj, Generalski Stol and Belavići are turning into summer resorts. These are also favourite bathing spots along the Duga Rosa – Ogulin road and points of short escape to the country around Karlovac.

The main summer pastimes obviously have to do with water. You can swim, jump into the water to your heart’s content and indulge in natural massages in the waterfalls. The children’s frolics are limited only in their imagination. That is when the water is warm enough. But there are summers when you cannot stay in the water for long. It is just too cold. But then again, during dry hot summers, the wallet level drops and the river turns into a veritable pond, with the water temperature rising to 25°. A fleet of canoes and other little boats is moored along the banks below the rows of summer cottages. Paddling is another favourite pastime on the over Mrežnica. You can use the boat for fishing too. But even if you decide to be idle, lust a glance across this wonderful setting is enough to fill your heart with joy, as the sound of silence is broken only by the soothing rumour of the waterfalls. The emerald and clear water, the unspoiled canyon and the tufa waterfalls are what makes the Mrežnica River one of the most beautiful in Croatia. 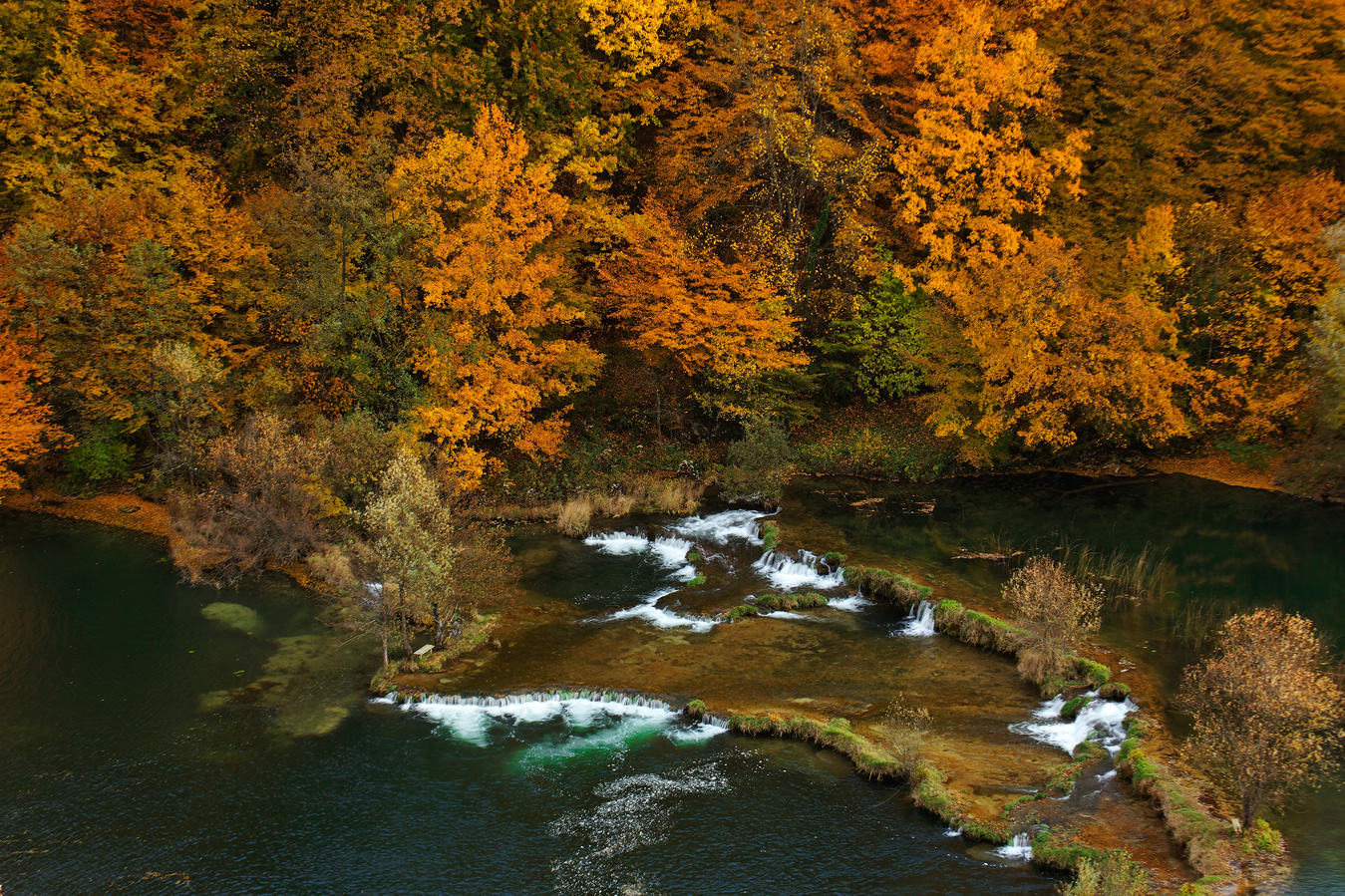 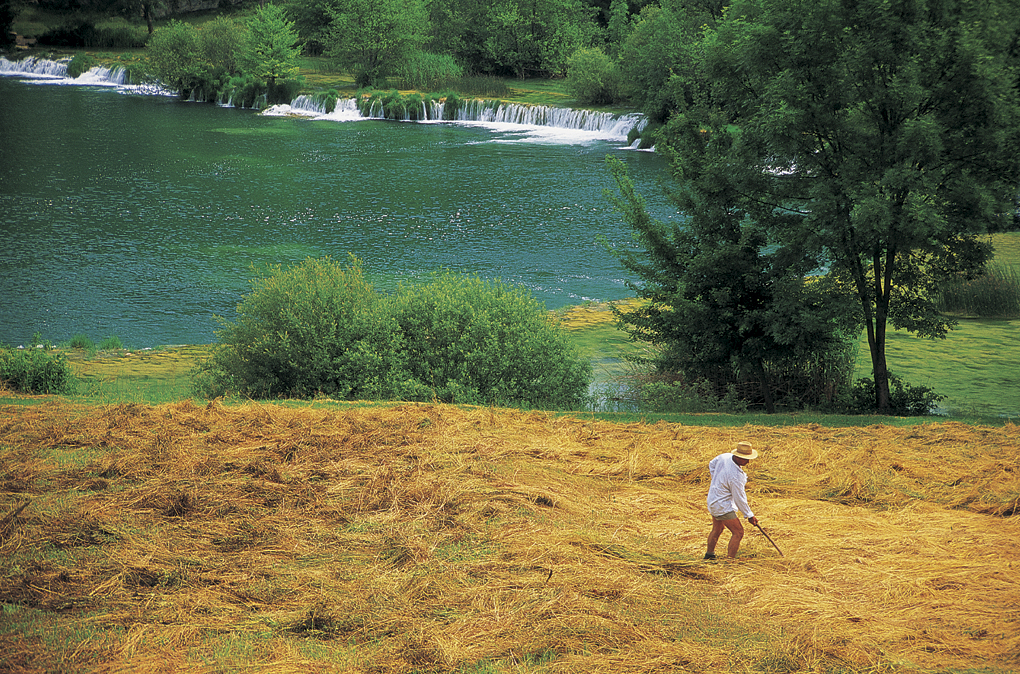 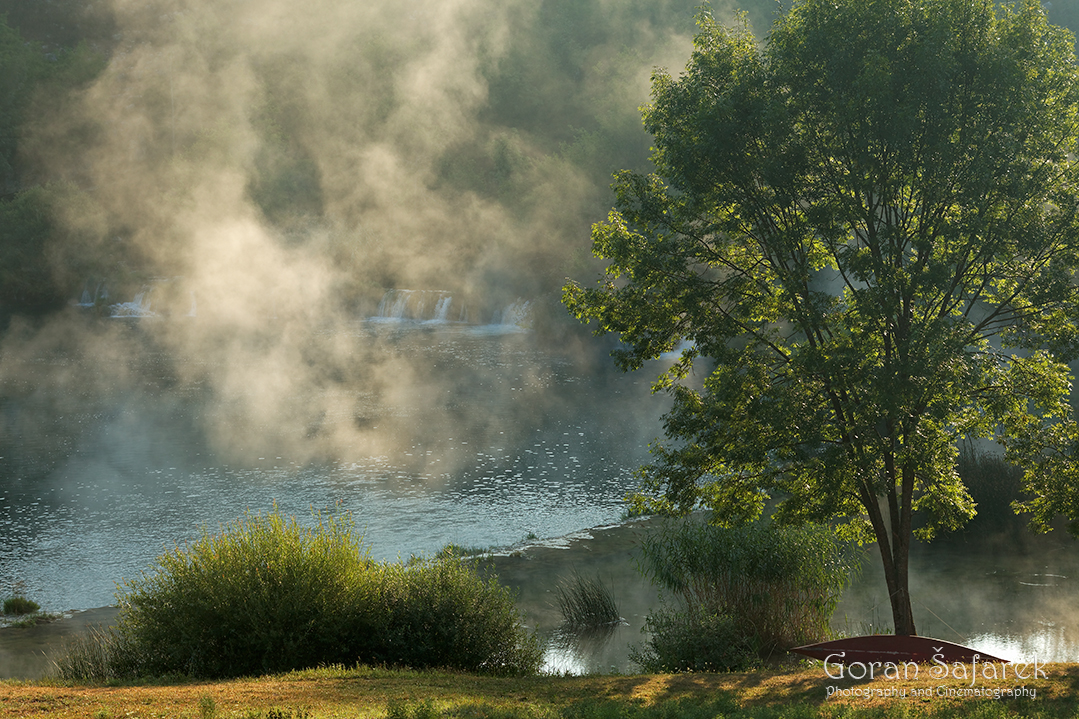 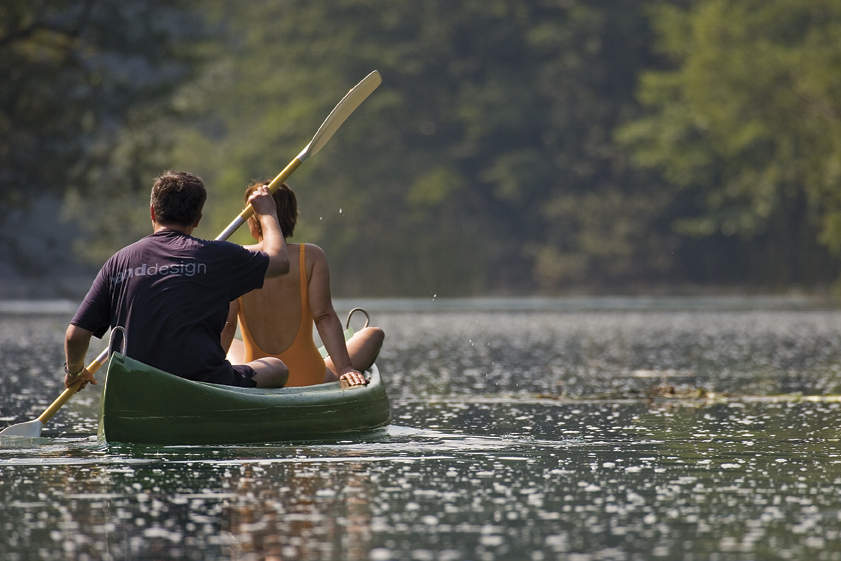 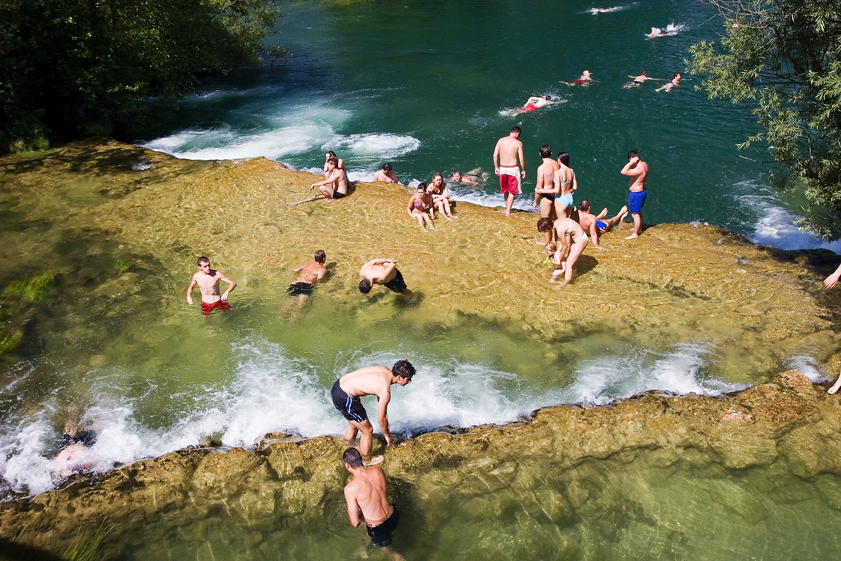 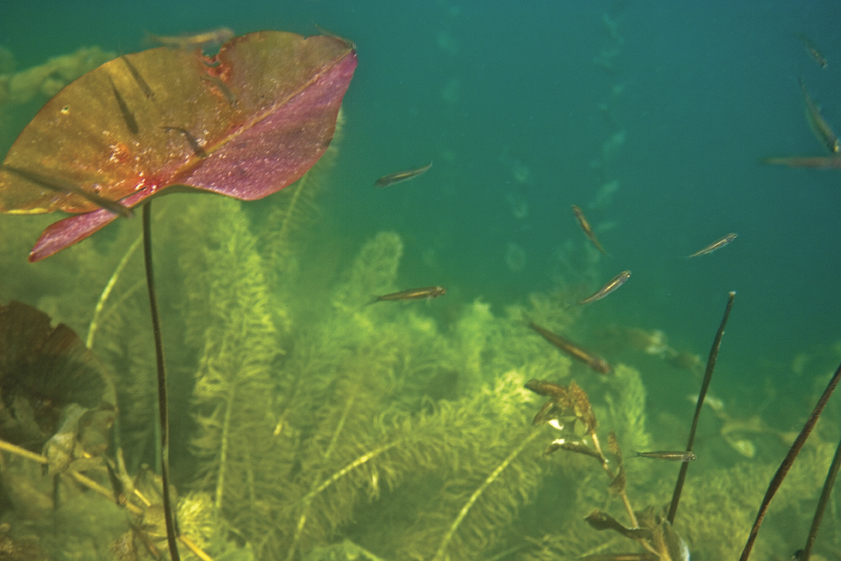 The wild beauty of the Krupa River
Tags: canyon, croatia, waterfall, watermill
Canyoning on the Cetina River
VIDEO: The Mrežnica River in autumn