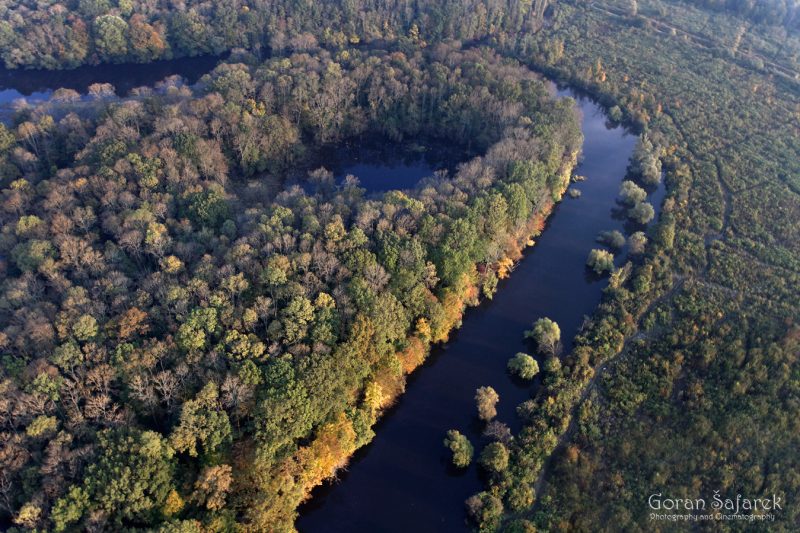 Slow, even stagnant habitats of the river side-branches and dead-branches, including oxbow lakes, are the mix of the river and wetland.

Side-branches are among the most important habitats of the lowland rivers and they are indicators of the living, natural river. They branch from the main river course and flow through the floodplain and then again join the river. When a side-branch loses its connection with the main course, a dead-branch is born. It is often of semi-circular shape, called an oxbow lake, reflecting its origin from a former river meander. Throughout decades, lowland rivers leave behind many such dead-branches that contribute to the high biodiversity.

The current is weaker in the side-branches compared to the main river course. Side-branches are shallower, too, is filled with sediment. Land and water ecosystems meet here, such as deer that come from the forest and wetland birds like herons and egrets. The abundance of the vegetation and slow flow attracts fish. In Europe, the Carps (Cyprinus carpio) and other species enter the side-branches and dead-branches in May and June to spawn, attaching the eggs into the gravel or plants. In this way they are safer from the predators and the current of the main river course. Fish fry that hatch from the eggs stay some time here before returning to the river. Until then, they are food for birds like kingfishers (Alcedo athis).

The oxbow lake is a real wetland. Reeds (Phragmites australis), bulrushes (Typha latifolia) and sedges (Carex sp.) grow on the shallow edges, big leaves of The Water Lily (Nymphaea alba) cover the water surface, while Eurasian Watermilfoil (Myriophyllum spicatum) grow densely below the surface. These stagnant water bodies age naturally, through the process of eutrophication. The light penetrates through the entire water column, enabling abundant photosynthesis and the production of organic matter. Plants and algae flourish and after dying (animals too) make the soft mud on the bottom. The dead-branch slowly fills with silt and becomes increasingly shallow. Soon, willows, alders and sedges invade the water.

Oxbow lakes in the Neotropics (Latin America) are extremely rich sites, in terms of the biodiversity. They are also vast water bodies, scattered along the river on both sides. Giant otters (Pteronura brasiliensis), caimans, anhingas (Anhinga anhinga), are just some of the numerous dwellers of these waters. Peculiar hoatzin is common on the branches overhanging the water. Such still water supports vast growth of water hyacinth (Eichhornia crassipes) and giant Victoria waterlilies (Victoria amazonica).

After many years, a forest returns, and it remains until the river once again migrates across its floodplain, driven by its dynamics, invading the forested area and starting the evolutionary process again.

How were magnificent waterfalls and lakes in Plitvice Lakes created?
Tags: oxbow, sidebranch, wetlands
The adverse effects of the river regulation
Under the waterfalls