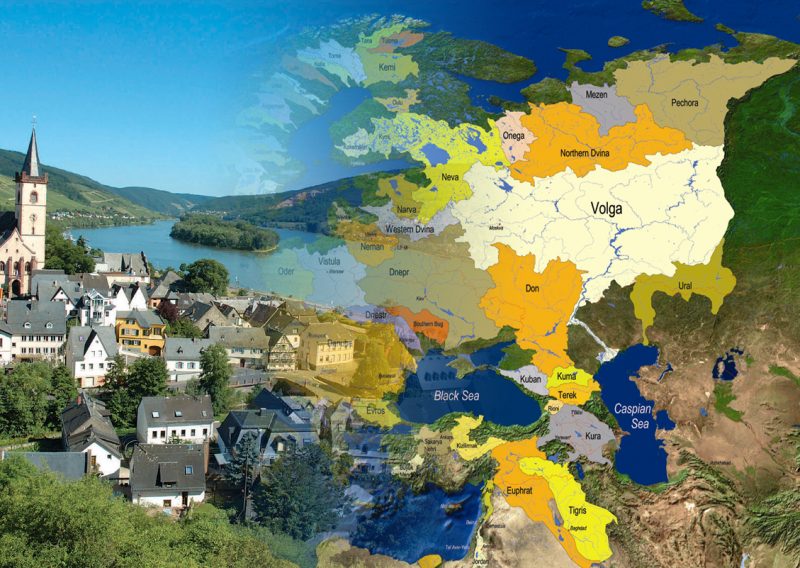 Europe is inhabited for millennia and, therefore, nature is significantly reduced, rives of this continent are sometimes the only remnants of nature. On the other side, some rivers still roam freely.

Even though Europe is a small continent, the diversity of European rivers is impressive, with environments ranging from the Scandinavian-Russian Arctic to mesic regions of middle Europe to arid areas of the Iberian Peninsula and Mediterranean coast.  On the other hand, with lower biodiversity of aquatic fauna in Europe, the authors’ descriptions of river-specific biodiversity, and threatened, nonnative, and extinct species serve to highlight the pressing need for conservation. Just take a look of Croatia, a small country that boasts with some untouched karst rivers, while also the Danube and its tributaries have preserved its vast floodplains.

Geographically, Europe extends from the Ural Mountains in the east to the Caucasian Alps in the southeast. There are over 150 transboundary rivers in Europe that form or cross borders of two or more countries. Europe has a total population of 780 million people, with more than 100 spoken languages.

Rivers recognize no political boundaries. This is particularly true for Europe, which has over 150 transboundary rivers. For example, the Danube is the 29th longest river globally, and it drains parts of 19 countries and 10 ecoregions. Because most of the European rivers are transboundary, the river catchment as the key ecological and management unit, rather than political boundaries.  Although there are numerous European river catchments, they are relatively small, and their rivers are short. About 70 European rivers have a catchment area which exceeds 10 000 km2. Only rivers arising deep inside the continent are relatively large. 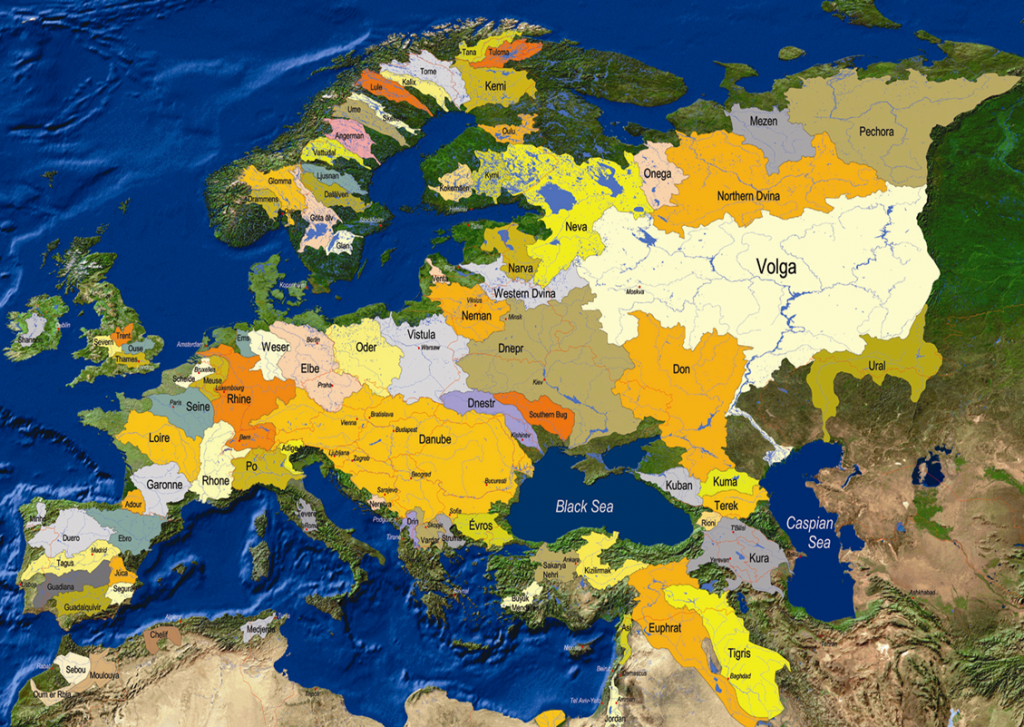 Europe’s three largest rivers, the Volga (1), the Danube (2) and the Dnepr (3), drain one-quarter of the continent. However, they are relatively small by world standards; their catchments ranking 14th, 29th, and 48th, respectively.

Europe’s 31 largest rivers (all of whose catchments exceed 50 000 km2) drain approximately two-thirds of the continent and include:

Over half of these rivers have their catchment area in the European part of the former Soviet Union.

The European climate is relatively mild, compared to those of continental land masses in North America and Asia located at similar latitudes, because of westerly winds warmed by the Gulf Stream carrying subtropical water to the European west coast. Mean annual air temperatures show a distinct north-south gradient with3C in the catchment of some Arctic rivers to >15_C in the southwestern part of the Iberian Peninsula, Calabria, and southern Anatolia (Figure 1.5A). The mountain ranges of the Alps and the Caucasus, and the eastern Anatolian uplands (to a minor extent also the southern Carpathian Mountains and the Pyrenees) are cold islands in a relatively warm environment.

The total average runoff of European rivers is 3100 km3/year from 11 million km2 (8% of the world average. The average annual specific runoff ranges from 68 mm/year (Asi River in southeast Turkey) to 1150 mm/year (Tay River in Scotland). High seasonality in runoff is typical for rivers in southern Europe and Turkey such as the Guadalquivir (Iberian Peninsula) and Upper Euphrates, and for Boreal and Arctic rivers such as the Glomma (Norway) and Pechora (Russia). Low runoff variability is characteristic for central European rivers (e.g., Elbe) and Steppic rivers (e.g. Dnieper)

The inventory of freshwater animal biodiversity lists 126 000 freshwater species. The actual species richness is likely to be substantially higher, edespite centures of the research. Nevertheless, European freshwaters are relatively species poor compared to other continents, for example less than 4% of the global freshwater fish fauna. This figure could be eve ess, as freshwater fauna (and flora) of Europe is much better described than the fauna of most other areas of the world.

Around 25% of all European birds and 11% of all European mammals are dependent on freshwater for breeding or feeding, but only three species are truly endemic to Europe (aquatic warbler, Acrocephalus palustris; southwestern water vole, Arvicola sapidus). Nine birds, two mammals and 200 fishes associated with European freshwaters are included in the International Union for the Conservation of Nature (IUCN) Red List of Globally Threatened Species. One success story is the recent spread of the European beaver. At the beginning of the last century only a few hundred individuals survived in Norway, Germany, France, and the former Soviet Union. The population has now increased to at least half a million, and is attributable to large areas of suitable habitats and restricted hunting. 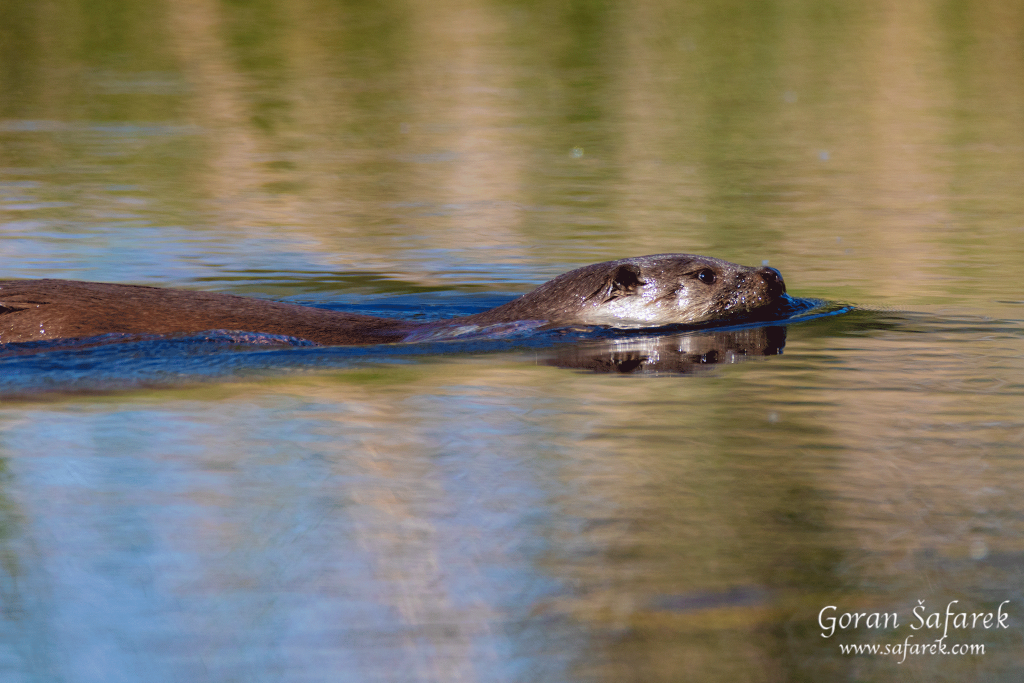 368 native freshwater fish species from 33 families are found in European rivers. The most species (taxa) rich families were Cyprinidae (156 species), Gobiidae (40), Cobitidae (32), and Salmonidae (22; 64 species if all species and forms are considered). However, 60 new species have been described in Europe since 2000, which have contributed  to more than 10% to the known diversity (550 native species including about 200 endemic to Turkey and the southern Caucasus slopes). Projections suggest that no less than 1000 species might occur in Europe. In comparison,North America contains 1050 species, Africa  more than 3000 species, and South America  more than 5000 species.

In Europe, a distinct west–east and north–south increase in species richness is found. The Danube River catchment has the highest diversity with 130 fish species (including nonnative species) (25% of the continental fauna). The greatest diversity of fishes is in southeastern European catchments (Western Balkan, Turkey). River basins in Northern Europe, from Iceland to Northern Russia, have been covered by ice until 12 000–6000 years BP and therefore have low fish diversity. At the continental scale, 13 fish species became extinct. At the catchment scale, up to 40% of native fishes have disappeared, especially long-migrating species such as sturgeons, Allis shad (Alosa alosa) and lampreys. Further, five native crayfish species, of the family Astacidae, and eight nonnative species occur in Europe. 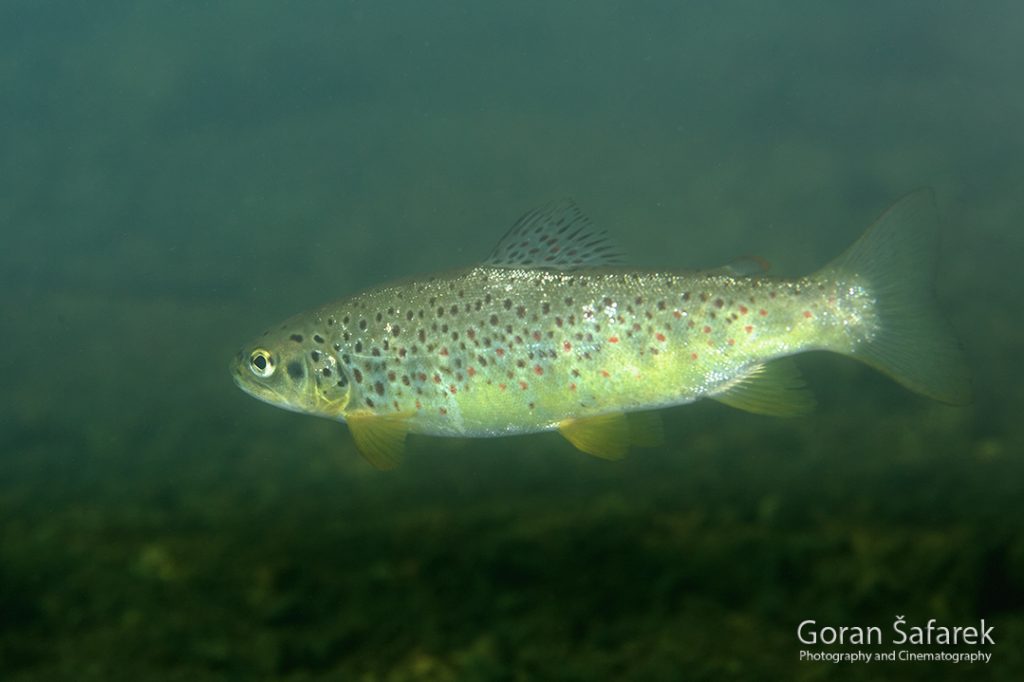 Milennia of changes made to European rivers

As a cradle of industrial human civilization, rivers of Europe are altered in many ways. European rivers were witnessed the deforestation of floodplains, wetland drainage, and early agriculture, at least 6000 years ago. More dramatic changes of channels, small dams, and levee-building likely did not occur in any significant way until 1000 years ago, and as the centuries passed, such activities became more widespread. Like North America, however, most significant engineering projects, particularly large dams, did not appear until the 20th century. As a result, few European rivers today are free-flowing with significant natural floodplains, and many suffer from a wide variety of additional impacts.

In Italy, land reclamation (‘La bonifica’) was common with most large rivers being partly channelized by 1900. The greatest single engineering effort in the 19th century was the regulation of the lower Tisza River, the largest tributary of the Danube River, where 106 km2 of floodplain marsh were drained and the river course shortened by 340 km. Today, European catchments are highly fragmented by  more than 6000 large dams. Reservoirs behind these dams can store 13% of the mean annual runoff of Europe (UNEP 2004). The highest numbers of dams occur in Spain (1196) and Turkey (625). Of the 20 largest European rivers, only the Northern Dvina in Russia, draining to the White Sea, is considered free-flowing. Of the 164 catchments (including subcatchments), only 28 are considered as free-flowing. Most of these free-flowing rivers are in northern Europe (Arctic, Fennoscandian Shield, Volga tributaries) or drain relatively small catchments (e.g. Amendolea in Italy, Frome and Piddle in Great Britain, and Sperchios in the Balkans, some Albanian Rivers).

Due to the development of agriculture in alluvial plains, the transformation of rivers to waterways for navigation, and the protection of settlements, floodplains have been ‘trained’ for centuries. Today, about 50% of the total European human population lives on former floodplains. As a consequence, 50% of the original wetlands and up to 95% of riverine floodplains have been lost. In 45 European countries, 88% of the alluvial forests have disappeared from their potential range. The Seine River (France) shows the highest impact of all European rivers with 99% of its former riparian floodplains lost. Of the former 26 000 km2 floodplain area along the Danube and its major tributaries, 20 000 km2 have been isolated by levees and have thus become ‘functionally’ lost; meaning that the basic attributes that sustain floodplains such as regular flooding and morphological dynamics are missing. Switzerland has lost about 95% of its original floodplains over the last two centuries. The remaining floodplains included in the inventory of ‘floodplains of national importance’ are far from being pristine, being heavily influenced by water abstraction, gravel mining, and fragmentation. Today, the largest remaining floodplain fragment in Switzerland covers an area of only 3 km2.

Some of the rivers retain some natural functions, such as those along the Oder River (Poland/Germany), the Danube River (Sava and Drava), and eastern European river corridors, are extremely important to protect. Allier River in France and Tagliamento in Italy are rare example of still preserved rivers in western Europe.

RIVERS – oases of life
Tags: europe
Rivers of Albania
The Una River – the one and only