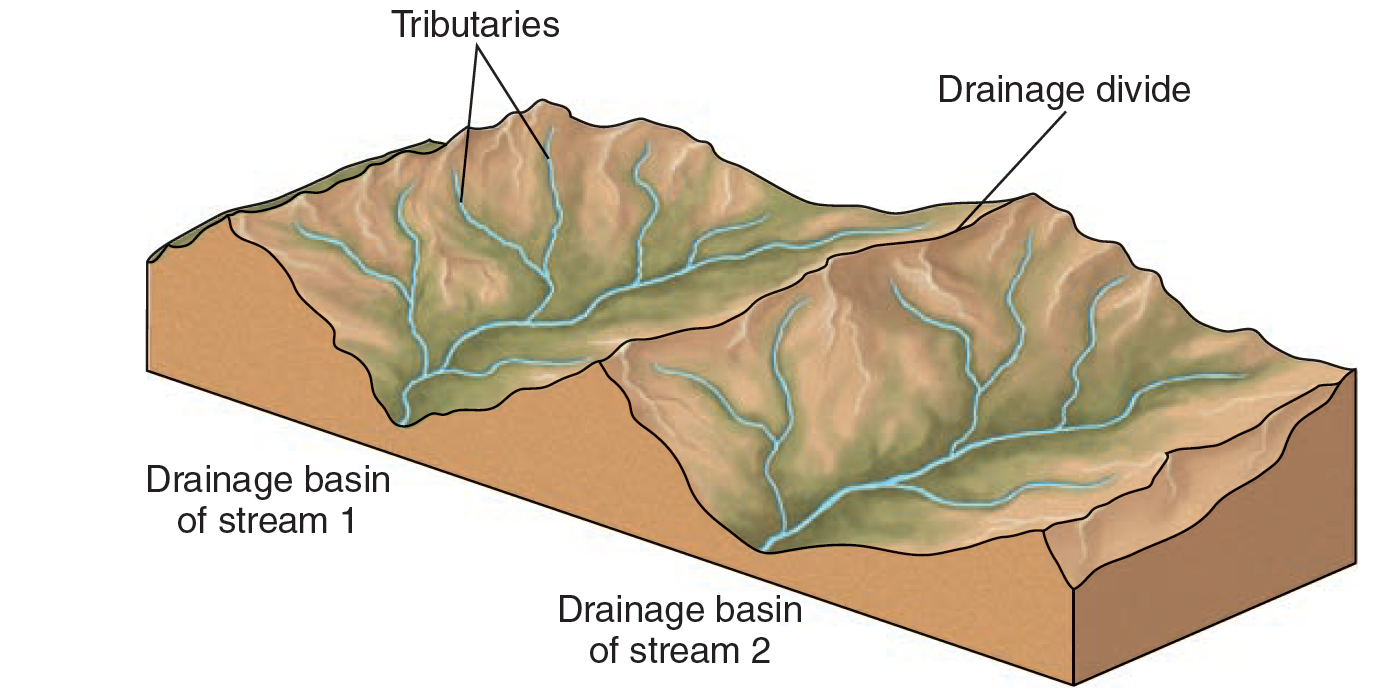 Each stream, small or large, has a drainage basin, the total area drained by a stream and its tributaries.

In the great majority of the rivers, water comes from numerous tributaries, rather than the river source. A tributary is usually a smaller stream or a river flowing into a larger one. Sometimes, this distinction is not so clear-cut which river is larger. Sometimes two equal-sizes rivers merge, but only one keeps its name by a convention. There are cases where a smaller stream keeps the name. A drainage basin can be outlined on a map by drawing a line around the region drained by all the tributaries to a river.

The Danube River’s drainage basin, for example, includes all the land area drained by the Danube River itself and by all its tributaries, including the other major rivers in Europe that join the Danube like Tisza in Hungary or Sava. The Mississippi River’s drainage basin in North America includes the Ohio and Missouri rivers, so this great drainage system comprises more than one-third the land area of the contiguous 48 states.

A ridge or strip of high ground dividing one drainage basin from another is termed a divide. The best known continental divide in the United States separates streams that flow to the Pacific Ocean from those that flow to the Atlantic and the Gulf of Mexico. It extends from the Yukon Territory down into Mexico and crosses Montana, Idaho, Wyoming, Colorado, and New Mexico in the United States. An eastern continental divide follows the Appalachian Mountains and separates those streams that flow into the Atlantic from those that flow into the Gulf of Mexico.

Terminology in hydrology is often confusing, so it is the case here. The drainage basin is also called a catchment or watershed (mainly in USA). A catchment area is separated from its neighbouring areas by a ridge called `divide in USA and Watershed in UK.

The arrangement, in map view, of a river and its tributaries, is a drainage pattern. A drainage pattern can, in many cases, reveal the nature and structure of the rocks underneath it. Most tributaries join the main stream at an acute angle, forming a V (or Y) pointing downstream. If the pattern resembles branches of a tree or nerve dendrites, it is called dendritic.

Dendritic drainage patterns develop on uniformly erodible rock and are the most common type of pattern. A radial pattern, in which streams diverge outward like spokes of a wheel, forms on high conical mountains, such as composite volcanoes and domes. A rectangular pattern, in which tributaries have frequent 90-degree bends and tend to join other streams at right angles, develops on a regularly fractured rock. A network of fractures meeting at right angles forms pathways for streams because fractures are eroded more easily than unbroken rock. A trellis pattern consists of parallel main streams with short tributaries meeting them at right angles. A trellis pattern forms in a region where tilted layers of resistant rock such as sandstone alternate with nonresistant rock such as shale. Erosion of such a region results in surface topography of parallel ridges and valleys.

How Many Rivers Are There in the World?
Tags: drainage basin
THE HYDROLOGIC CYCLE
Rivers that disappear in the continents