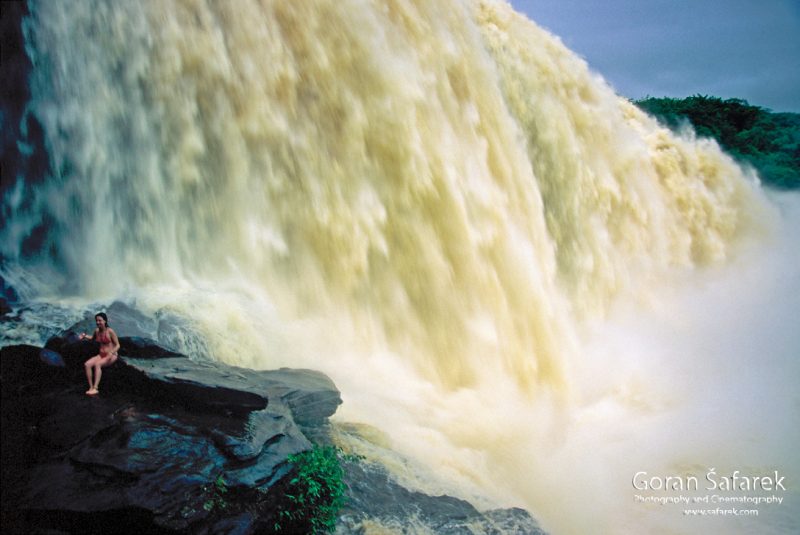 Waterfalls are often the most striking features of the rivers. Here we present our TOP 10 waterfalls!

Waterfalls are indeed some of the most striking features of the rivers. They can be formed in many ways, from classical fall over the cliff to the intricate interplay of the living and nonliving, like phytogenic tufa on rivers with underlying limestone geology.

While the term “the most beautiful“can’t be measured in some objective ways, some waterfalls indeed are more attractive than others. Sometimes, it is the natural settings, or the pure power or any other esthetic reason. I prefer the natural environment as well. For this reason, Niagara falls are not on my list, as they are almost urban. Here is my personal list:

Plitvice are the most famous waterfall and national park in Croatia, but Krka is equally gorgeous, even more. Skradinski buk, the longest waterfall in Europe, made up of many smaller cascades. First a maze of emerald-green, fish-filled river lakes, connected by smaller falls and rapids, then an 800m-long cascade that descends by almost 46m before crashing into the estuary. Then it flows toward sea near Šibenik. The Krka River is a mixture of the Mediterranean fragrances, the mixture of the sea and freshwater, the freshness in a hot day and age-old watermills – the famous picture from the postcards, true highlight of every vacation on the Adriatic coast.

Read more about this waterfall

Late spring (May, June) is the best time to visit these cascades. Water is at its peak, it is warm enough for swimming and the crowd is still not congesting small wooden footbridges.

Located deep in the Venezuelan wilderness, Canaima National Park and Angel Falls waterfall are one of the most beautiful landscapes on the Earth. While Angels Falls are the highest waterfall on the Earth, Sapo and other falls convey colossal energy. You can even enter the womb of the Sapo waterfall. Located on the lost world of tepuis, deep in southeastern Venezuela, they are the source of many legends. Unfortunately, the country is in serious political turmoil, and visiting these gems is not so easy anymore.

Read more about this waterfalls 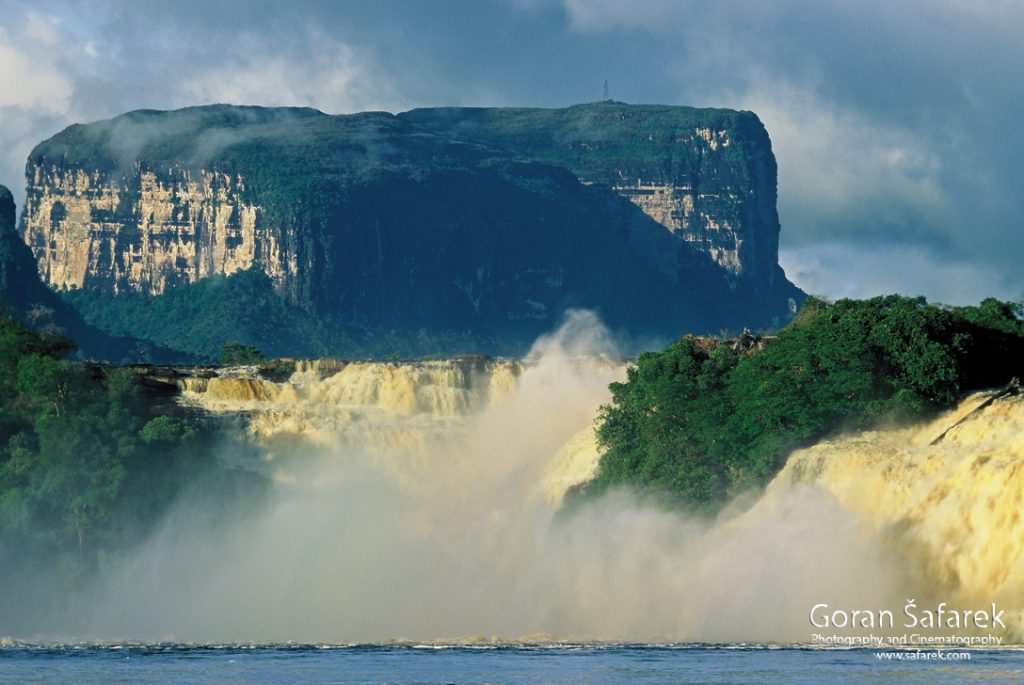 Most if not all river trips take place between June and December, when the water levels are high enough to ensure safe river passage and the views are the most brilliant. Trips at other times of year may not be possible, so plan accordingly.

One of the planet’s most awe-inspiring sights, the Iguazu Falls are simply inviting all river and waterfall admirers. Most of the people will not forget the power and noise of the cascades. There are more than 270 falls, reaching heights of 200 feet (60 meters), in an area where cliffs and islets are scattered in a half-moon. An added benefit is the setting: the falls lie split between Brazil and Argentina in a large expanse of the national park, much of it rainforest teeming with unique flora and fauna. The falls are easily reached from either side of the Argentine–Brazilian border, as well as from nearby Paraguay.

The falls are OK to visit year-round. During the wet season (December, January, and February), the falls are at their full power, but it could be rainy and slippery. Dry season (March-April and August-September) offer more blue skies but also more crowd and less water. Still impressive!

Victoria Falls are located on the Zambezi River, forming the border between Zambia and Zimbabwe. The wide, basalt cliff over which the falls thunder, transforms the Zambezi from a placid river into a ferocious torrent cutting through a series of dramatic gorges. This is another never-forget falls, with columns of spray that can be seen from miles away. At the height of the rainy season, more than five hundred million cubic meters of water per minute plummet over the edge, over a width of nearly two kilometers (1,2 miles), into a gorge over one hundred m (328 ft) below.  A path along the edge of the forest provides the visitor prepared to brave the tremendous spray, with an unparalleled series of views of the Falls.

Weather is generally fine year-round, but, summers can be hot and too dry with less water. The falls are on full throttle between March and August.

Island has become a top world destination for its striking landscapes, and the waterfalls will not disappoint you too! Gullfoss Falls are Iceland’s most iconic waterfall, born on a mighty Olfusa River. Even though the cascade is just 104 ft (32 metres) tall, Gullfoss offers a dramatic sight: it appears as though the water rushing off the cliff is simply vanishing into thin air. Luckily, it has escaped the death from the hydropower dam.

As with the rest of Iceland, Summer’s warmer weather and breathtakingly long days make for the best time to see the falls in all their splendor. Many suggest a visit in the afternoon, around 3pm-4pm for the best lighting over the cliffs.

Tropical Asia is home for numerous waterfalls, and The Gioc–Detian Falls is one of them. It straddles the border between Vietnam and China. If you love the outdoors, this is the place of dreams, with running rivers and gorgeous green lagoons, isolated trails, and stunning mountain views. You can access it by boat from Hanoi.

The best time to visit Ban Gioc Waterfall is from May to September when it sometimes rains so you can see a big waterfall and you can swim in its fresh water. It is also helpful to visit from October to December, but the falls is not as big as other months, and it can be too cold to swim.

Yosemite is one of America’s most iconic national parks, and its waterfall is one of the iconic landscape feature. Located in California, is one of the biggest attractions for visitors to Yosemite National Park. It’s the tallest waterfall in the park at 2,425 feet and also sports three gorgeous drops in total.

Spring is the best season to visit Yosemite Falls as the wildflowers will be in bloom and the weather will be warm but mild. Don’t let the myth of “California weather” fool you, winter visitors to Yosemite can expect snow and somewhat compromised waterfall vistas.

Tumpak Sewu, also known as Coban Sewu, is a tiered waterfall that is located in East Java, Indonesia. The waterfall is overshadowed by Semeru, an active volcano and the highest mountain in Java. Lush tropical environment makes a perfect background for a stunning landscape of the waterfall.ž

Since the amount of water is the same both in dry and rainy seasons, it’s better to avoid the wettest months between November and March. The thing is during heavy rains, it’s the valley may be closed due to landslide hazards. Moreover, the river gets too strong, so you’ll be able to safely cross it only accompanied by a local guide. If you can’t make it outside the rainy season, at least make sure to come early in the morning, as it mostly rains later in the afternoon. Also, avoid weekends as much as you can, as it gets crowded. Early or late hours are even the best to avoid getting trampled by the hordes.

Hidden on New Zealand’s South Island is the breathtaking Sutherland Falls is breathtakingly580 meters tall. These falls are the highest waterfall in New Zealand. It is, of course, one of New Zealand Must See Waterfalls. The only disadvantage is that it’s not easily accessible – to visit it you should either walk 4 days tramping Milford track or take a scenic flight.

When to go? Inexperienced hikers will stick to the summer, aka late October to early April. But weather in rain or sunshine, Sutherland Falls is undoubtedly a sight to see, along a path sometimes called “The Finest Walk in the World.”

Tucked away in one of the most pristine rainforests left on earth, Kaieteur Falls is located on the Potaro River in central Essequibo Territory, Guyana. It is 226 m (741 ft) high when measured from its plunge over a sandstone cliff to the first break. It then flows over a series of steep cascades that, when included in the measurements, bring the total height to 251 meters (822 feet). While many falls have greater height, few have the combination of height and water volume, and Kaieteur is among the most powerful waterfalls in the world with an average flow rate of 663 cubic m per second (23,400 cubic ft per second).

When to go? Weather in this region could be unpredictable. The dry season in Guyana runs from March to June, making it an appropriate time to plan your adventure.

Experience the Majestic Beauty of Ban Gioc/Detian Waterfall!
Tags: wtarefall
The most important rivers in the world
Waterfalls – the most beautiful parts of the river