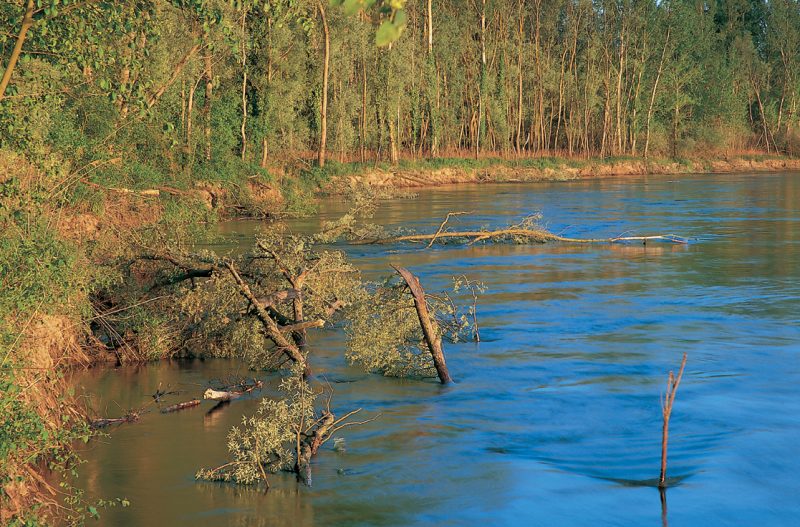 Dynamical, natural river harbors many habitat and the corresponding species of the animals and plants. Such river is in constant rejuvenation and creation of new habitats.

It is no brainer to see that the regulated river, with artificial banks, no riparian vegetation and other elements of the natural river (bars, steep banks side branches, etc) is mostly deprived of the life. Even some “light” regulation that allows “green” river banks (thin layer of vegetation) are actually only a fragment of the biodiversity that we see on natural rivers.

Learn more about other negative aspects of river regulation.

Dynamic river, we speak mostly of the lowland, meandering rivers, is continually rejuvenating itself. Key to this fountain of youth is the cycles of erosion and deposition. Above mentioned regulated, the green but static river has only the one, last stage of the vegetation successions – usually the forest. On natural streams, on the other hand, we find all stages of biological successions, from the bare ground to the mature forest.

How does it happen?

The water erodes one side of the bank while depositing sediment. Learn more about erosion. The eroded side, the steep banks are continually being created or renovated. This is a precious habitat for some birds like sand martins of kingfishers.

The sediment that is being deposited as gravel and sand bars, not only comes from the headwaters (See sediment transport), from the local sites but as well, resulting from the lateral erosion of the river banks. Gravel and sandbars are the first stages of the plant colonization. If not washed away, pioneer plants will fix the bar with its roots and trap the finer sediment, kicking off the invasion of other plants. First grasses and tree saplings, followed by fast-growing shrubs, then young and dense forests and finally mature stages of the forest. Each of these stages supports different plant and animal communities, packages of the biodiversity.

At the same time, the river is “moving,” shifting its course. It opens new side branches (sidearms), or more often, reclaims the old depression in an easier way. The meandering river is also cutting off the meanders, leaving them as flowing side waters which gradually turn into a stagnant backwater – an oxbow lake. These backwater ages, slowly accumulating the fine sediment and organic matter from the surrounding vegetation and its own biological primary production. This aging goes through several stages as well, each one of them with different sets of animals and plants. In tropical and temperate regions, it will eventually end up dry, like a forest.

The natural river is consonantly in the flux, resetting the itself to the beginning of the successions. It erodes, deposit the sediment, meander. These cycles are never-ending, enriched by the floodings. Such river is in constant rejuvenation and creation of new habitats.